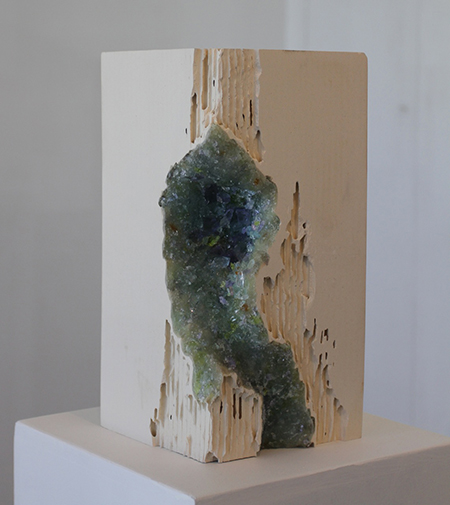 In today’s cultural climate, complete aesthetic liberty prevails under the banner of democratic pluralism. It has of course been co-opted by the alpha elitists, so that pretty much anything passes for art if anyone authoritative says it is. Philosopher Arthur Danto, reeling in the shock of Warhol’s "Brillo Box” a half century ago, declared that something was art if anyone in the art world so declared. Fortunately many contemporary artists approach their work more seriously than this, with a more vigorous self-criticality. Randy Colosky is among this latter group.

Colosky has proven to be one of the most adventurous yet disciplined younger artists on today's scene, and "Rise and Fall” makes the case. Lightweight prefabricated bricks of porcelain-like “engineered ceramic block,” 12 x 6 x 6 inches apiece, are reminiscent of honeycombs, but composed of cubic instead of hexagonal cells. Colosky, whose work takes forms dictated by the nature of the materials he chooses, has respected the inherent nature of the blocks, but combined and altered them to create scientific-poetic objects that inescapably suggest conscious shifts in economics, demographics and infrastructure — or, in other terms, architectural ruin and renewal.

"Rise and Fall," the largest piece at five feet tall, is human-scaled and anthropomorphic (as well as anthropogenic). Its rough-hewn or eroded carved-out areas, exposing corrugated chambers within, suggest bombed out buildings and rotting wood, as well as Expressionist/Surrealist sculptural figures. Three single-brick sculptures, "Red Vug,” "Blue Vug" and "Green Vug," feature cavities decked with colored lead crystal suggestive of geometric geodes. (A vug is a geological fissure with crystallized mineral deposits.) Three stele-like slab pieces, rectangular sheets aligned vertically, look back to the wax pieces Colosky showed several years ago, striated and deformed, like crumpled sheets of paper (or maps), straightened out imperfectly; they might represent the grid of culture, riven by natural stresses and dislocations, if I may remind those not aware of it about the Bay Area's seismic history.

Also included are five small “Wave" sculptures, 3-D representations of scientific data; five lead crystal bowls (the “Pool" series); a lead crystal sculpture in the melted-beam style of a previous show; a pair of photo composites with the images or rainbows aligned into swooping arcs or figure eights; and two of the golden snowflake forms that the artist made with folded paper and shotgun shell.