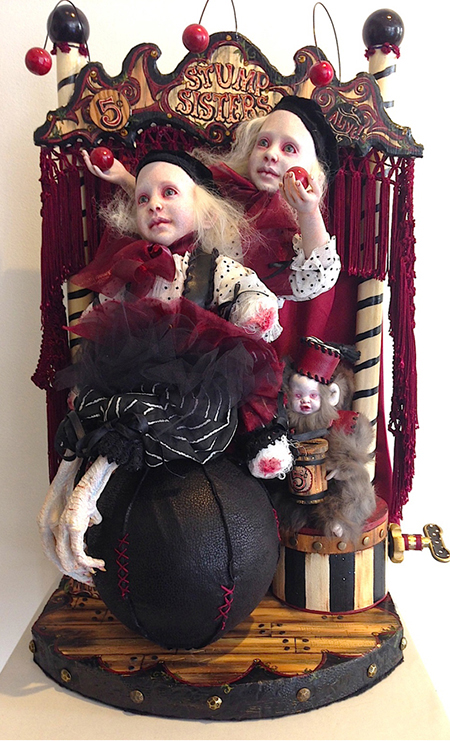 "Rough & Ready Sideshow" features four bodies of work geared to appeal to several youthful Gothic, punk, and steampunk constituencies, as well as their elder grognards of the Surrealist and Beat persuasions.

Stacey Ransom and Jason Mitchell collaborate on dark, richly textured digital black and white photocollages of bizarre stage performers that might be from the late nineteenth or early twentieth century. With their scalloped mats and cheerful self-presentations, these are fan photos from an alternate reality. The idea of relics of an unknown history has been used by others — Joel-Peter Witkin, Robert ParkeHarrison and Kahn & Selesnick come to mind — but R&M’s troupe has its own peculiar charm. “The Pharaoh’s Daughters” presents twin sisters, tiaraed, in gold lamé bustiers and fishnet stockings, high-kicking (or doing pointed-toe high fives). "Two Halves and a Whole" reveals a woman sawn into two halves flanking a dwarfish magician replete with fez, his handsaw resting atop a stepstool. “Spidora" depicts an exotic performer with snakelike hair and four arms and legs, probably dancing a tarantella, a manic dance once believed to be caused by spider bite.

Stephanie Vega’s recombinant ”rogue taxidermy” sculptures combine parts of the porcelain dolls that have fascinated her since childhood. Of course she adds such girlish things as preserved birds, bones and skulls. The puppets in "The Bluebird of Happiness," "The Stump Sisters" and "The White" give the alarming impression of merely pretending to be inanimate. They’re not devil dolls in the Hollywood sense (“Magic,” Dead of Night,” “Chucky”), but rather, in Vega’s words, “beyond mundane concern [with] the secrets of life revealed.”

Alexandra Manukyan’s classically executed oil paintings focus on the “shared encounters of pain, loss, desire, and longing for serenity and acceptance” underlying our socially constructed facades: “The women that often preoccupy my paintings figuratively and literally wear their wounds with resounding pride and empowerment.” The portrait sitter in “Melting Sorrow,” garbed in a combination of Rubens and Burning Man, looks impassively at the viewer, while candles burn on her shoulders, dripping wax down like gold military braids. The gimp-hooded subject of “Impaired Affliction,” in erotic-exotic red and black leather and lace, holds up a cruel-looking leg prosthetic, steel with leather straps.

Aunia Kahn’s digital prints on canvas, "Das Verbunden Frauleins (The Connected Miss)" and "Das Frauenmesser (The Lady Knife)" depict pale-skinned, dark ladies of the theatrical demi-monde wielding their noiresque allure like the snakes and daggers they brandish. Female empowerment in the twenty-first century hooks up with the nineteenth century femme fatale. Kipling wrote, “"The female of the species must be deadlier than the male,” so attend your purity of essence and precious bodily fluids guys.  Step right up if you dare.