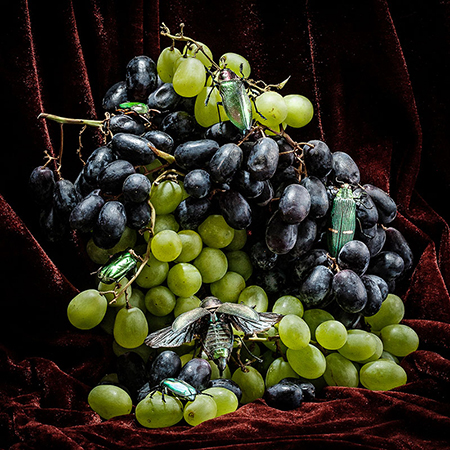 A strain of pagan mysticism weaves through Wendy Given’s haunting exhibition, “Creatio." Given interlaces Druidic, Celtic, and Gaelic motifs with imagery culled from the Columbia River Gorge, near which her Portland studio is located. In the photographic prints "Of the Garden: Progenitor" and "Of the Garden:  Progenitress," moss-covered creatures (in actuality a person wearing a ghillie suit) stand forlornly in a clear-cut patch of forest and at the base of a waterfall. Their presence is that of archaic spirits of tree and stream, now orphaned in an era when technological gadgets have supplanted the old gods. It’s a surprisingly touching image, given how low-budget and downright silly is the appearance of the ghillie creatures.

An aura of dolorous camp enlivens a series of still lifes, which depict desiccated fruits sitting upon folds of maroon velvet. The rotting-pumpkin image is especially disturbing, gashed open and displaying its putrefying innards — like a jack’o’lantern disemboweled by Jack the Ripper. Another still life, "Freja’s Bitter Flowers," presents a sumptuous, painterly tableau of purple roses, geodes, fruit, and eggs, one of which rests inside the unhinged jaws of a bobcat’s skull. Themes of nature, decay, and death permeate this deceptively beautiful body of work, whose dark heart thumps to a Wiccan drumbeat — just in time for Halloween, no less.