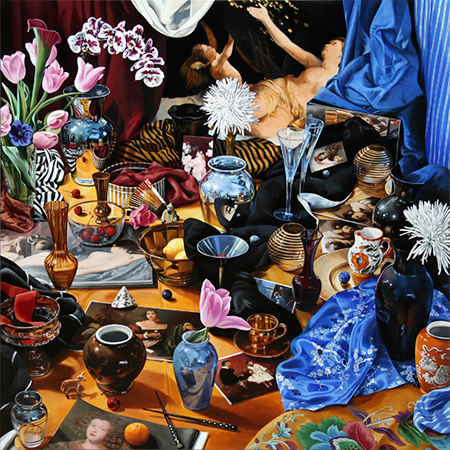 As evinced by “Museum," her playfully forward-pushing exhibition of new work, Sherrie Wolf is not content to rest on her laurels — or her florals. Rather than merely continue painting variations on the sumptuous, immaculately realistic flowers and vessels that made her reputation, Wolf keeps adjusting her pictorial strategies, as if to retain her own interest and keep longtime followers from falling into the voluptuary trance her opulent tableaux are apt to induce. In a stroke of virtuosic wit, she superimposes her trademark parrot tulips in sinuous vases before reproductions of some of art history’s most iconic images: five paintings by Caravaggio (including the grape-wreathed “Bacchus") and one by Ingres (“Odalisque").

As these mythical sitters stare forth across the centuries, Wolf shows their faces in double image, one straight-on, the other refracted through the water in the vases. These are small but spirited triumphs of illusionism, affording viewers an opportunity to see warhorses of the Western canon in fresh and unexpected ways. Further, the art-museum postcards that sometimes figure in Wolf’s compositions seem to be multiplying. In "Relics #3" they’ve fairly metastasized across the picture plane, a veritable cardstock forest of historic masterpieces. Wolf is a veritable time-traveler, armed with a paintbrush and a sense of humor. In "Self-portrait with My Museum" she depicts herself drawing open a curtain, beckoning viewers into the treasure chest of her aesthetic influences. Michelangelo’s “David" and paintings from the Hudson River School fill the background, while one of Georgia O’Keeffe’s blanched cow skulls commands the foreground. Just off center is Wolf herself as docent, tall and thin and chic, wearing a bemused expression that seems to say — more in wonderment than self-aggrandizement — "Look at all that I can conjure!”