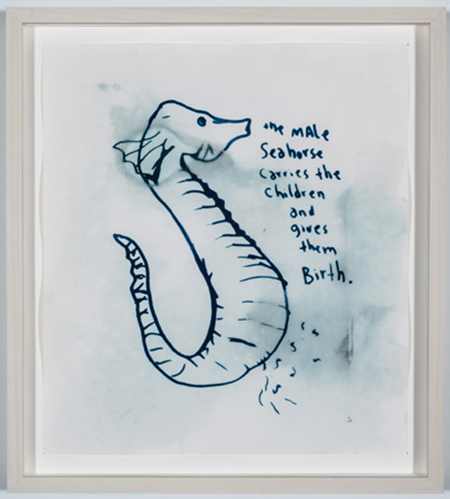 Dario Robleto’s all-encompassing interest in astronomy, medical research, music, history, popular culture and art is reflected in complex constructions and thought-provoking wall pieces. “Life, Left to Struggle in the Sun,” a grid of 16 cyanotypes created from poems, sketches and notes by writers and musicians whom he admires, addresses the nature of the creative process. Robleto uses the 19th-century photographic process to reproduce handwritten and hand-drawn pages by John Keats, Marcel Proust, Edgar Allen Poe, Johnny Cash, John Lennon, Van Morrison and 10 others.

When Robleto was seven years old, he heard about NASA’s plan to place a “Golden Record” aboard the Voyager spacecrafts, whose missions were to explore interstellar space. He convinced his mother to let him call a special NASA number and listen to a section of the record, which contained sounds from earth, including a volcano erupting, a baby being born, various world-music selections, and a woman’s brainwaves and heartbeat. Robleto happened to call when the latter was being played, and the experience prompted him to investigate further, ultimately resulting in his becoming an artist. Along the way he befriended Ann Druyan, the woman on the record. Druyan and her husband, Carl Sagan, were primarily responsible for compiling the sounds on the Golden Record, which they hoped would someday communicate the story of earth to extraterrestrials.

Like the record, Robleto’s artwork is a diverse selection of pieces that reflect his voracious curiosity and research. Two large groups of assemblages are especially fascinating. “Setlists for a Setting Sun (Dark was the Night)” was inspired by Blind Willie Johnson, whose song of the same name was included on the Golden Record. “Setlists for a Setting Sun (The Crystal Palace)” references the world’s first live recording at London’s Crystal Palace. For these pieces, two large vitrines are filled with small sculptures assembled from cyanotypes, butterflies, feathers, beetle wings, minerals, crystals, shells, ocean water and other curiosities. Another piece, “The Moon Won’t Let You Down,” reveals the artist’s ongoing interest in astronomy, with its amateur photographs of “super moons” presented in a maple box. All of Robleto’s creations reflect a desire to understand and connect with life’s great mysteries — deep space, the ocean, and the human heart, as well as the nature of love, life and death.