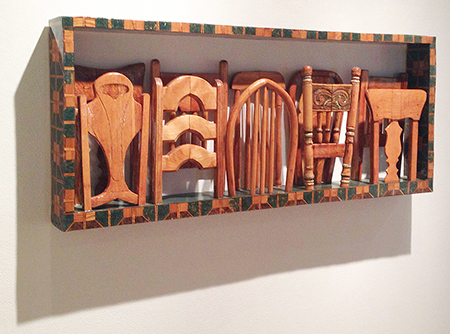 Chicago’s art community lost pioneering sculptor Margaret Wharton earlier this year. Born in Virginia, Wharton came to Chicago during the city’s Imagist heyday of the 1970s; though her predilection for found objects and figurative references aligns her, in part, with the practices of this older generation, Wharton remains truly influential in her own right, through her oeuvre and for her part in founding Chicago’s first all-female art gallery in 1972: the now defunct Artemisia Gallery. Wharton’s first love was welding, though this exhibition, “Margaret Wharton: In Memoriam,” samples her entire career with remarkable works in wood, repurposed objects and non-art materials.

Here, reflecting Wharton’s overall practice, chairs feature prominently. In “Navajo Medley” (2014), the chair remains intact, though covered in a decorative pattern of matchsticks, so it is both alluringly tactile and unnervingly dangerous. In “Vacant Lot” (1996), the chair is reduced to pieces, the detached backs lined up inside a wall-bound box. The chair backs, each of a different design, are positioned facing outward as if peering toward the viewer, transforming these objects from mere utilitarian items to forms that seem strangely human themselves.