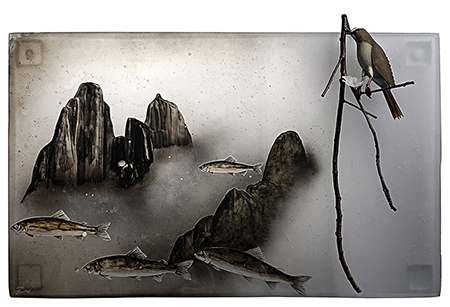 Hiroshi Yamano is probably the best known Japanese glass artist. Glass is not a material closely associated with Japanese art and this is reflected in Yamano’s U.S. training at California College of the Arts, Rochester Institute of Technology, and the Penland School of North Carolina. The current series, “From East to West: Scene of Japan,” shifts from earlier hand-blown vessels with gold-and-silverleaf fish decorations to three-dimensional sculptures of birds on branches of trees that appear set above flowing streams. They are significant for a number of reasons.

Much of the 58-year-old artist’s reputation is based on endless variations of blown-glass vases decorated with fish. They have attracted admirers around the world and led to a number of awards and inclusion in prestigious gallery and museum exhibitions outside Japan and the US in England, Switzerland, Germany, Taiwan and Australia. These transitioned to blown and cast bowls that had life-size glass fish attached. The new work mostly dispenses with a supporting bowl or vase in favor of pedestal-size tableaux. Even if one is willing to define vases and bowls as sculpture (and some critics and curators do), the “Scene of Japan” subgroup on view here is distinctly more sculptural.

Leafless metal-electroplated cherry tree twigs and branches of increasing complexity form the perch for individual birds, some of which are native to Japan, others purely imaginary. From a technical standpoint — what with the birds blown into molds and then sculpted; the clear glass slab bases cast; and the remaining creatures (chiefly swimming fish) cast, sculpted and painted — the assemblages are extraordinary accomplishments. Within such parameters and virtuosic challenges, each scene (all works are 2014) is different and numbered individually for titles.

To understand Yamano’s new “Scene of Japan” series, it can be helpful to briefly review the place of birds, landscape, and other craft materials in the history of Japanese art. Doing so explains the artist’s careful debts to tradition and provides the context of his few artistic predecessors. No one else has ever made glass birds in Japan that are placed in three-dimensional natural settings; but there are numerous examples of bird imagery in Japanese art, replete with symbolic meaning.

For example, the bird perched on a winter or spring branch goes back at least as far as Kano Motonobu’s “Cranes and Pines,” a mid-15th century hanging scroll. In the 17th century, Ogata Korin painted a long scroll of many types of birds, including pheasants. One hundred years later, Maruyama Okyo concentrated on recording tree and bush branches and leaves on another paper scroll. Yamano borrows both the precision and detail of his predecessors as well as approximating a kind of catalogue-like thoroughness.

For the composition of “Scene #173,” a large bird on a bare branch echoes “Shrike on a Dead Branch” (c. 1600) by Miyamoto Niten, who painted the scene with a similar stark, blank background. More fantastical, Yamano places two fish swimming above a clear slab meant to represent water beneath the tree.

A mountain range scene is engraved through silver leaf on the lower plinth of “Scene #177” while, hanging on the wall, “Scene #169” sets the bird and branch over the larger (2 by 3 feet) view of sheer rocky peaks and four trout. Japanese woodcuts are an important source here with the same abruptly foreshortened perspective that influenced the Impressionists.

The one vase used as a support (“Scene #168”) is flattened on both sides, all the better to depict a delicate landscape. Sculpted glass flowers in the form of cherry blossoms are strategically placed on branches to symbolize rebirth and the coming of spring. The appearance of birds — always alone — underscores the fragility of wildlife preservation in today’s world, especially Japan (An artist from Japan once told me that, before she saw the forests of the Pacific Northwest, she felt she had never really experienced nature.).

The largest bird of all, “Scene #172,” rises above a gnarled cherry tree branch. According to the artist, he uses the same patina as ex-Samurai metalsmiths and sword makers in 19th-century Japan. The hand-painted feathers on the birds are also extraordinarily lifelike.

Although Yamano has told interviewers that he identifies the fish in his pieces as “self-portraits,” the exquisite yet forlorn birds seem to me more convincing stand-ins. However, such details are not necessary to appreciate these visions of an imaginary world. Not at all utopian, but still hopeful and enchanting, Yamano’s scenes are his best work to date. They suggest that his fully integrated compositions of mixed imagery and materials reveal the more ambitious and complex work of which the artist is capable.