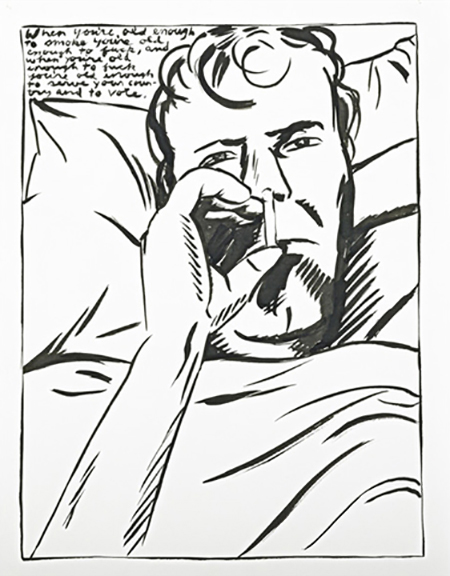 Happy New Year! It’s early September, after all, and I’m just starting school, as I have every autumn since I was 4. Public school, college, grad school, a year’s study in Europe, and then over 30 years teaching college, I’ve never missed a September. For me the year runs from Fall to Spring, and that thing you celebrate on January 1 is just a day between semesters. It’s been great, I’ve been luckier than I deserve, and the last 27 years at the School of the Art Institute of Chicago have gone by in a flash, one course, one semester, one group of students at a time. My heart will be pounding this week when I face two roomfuls of SAIC students and begin the process again.

But it’s been noticeable these last few years that what I and thousands of my colleagues across the country are about to commence has come under increasing criticism, both from within the art world and from the outside. The dull and somewhat embittered chant from the outside I’ve come to expect is that a career in the liberal arts is a waste of time, that our society needs engineers and technicians, not poets and art historians, that college should first and foremost be a kind of vocational school turning out skilled workers and researchers. The chant is louder and more embittered in tough economic times than in greener days, but there’s always been a degree of resentment to what seems the escapist life of an academic, particularly one who concentrates on what many in the public consider to be elitist and tangential.

All right, none of that surprises me, the rhetoric has become perhaps coarser and more vitriolic, but that’s true of almost everything recently. The more painful assault has been the pointed critique of college and graduate art education from many within the art community itself. In social media platforms I regularly read the laments of former art students who haven’t achieved the career they sought or felt they deserved. In the course of this shortcoming they have accumulated onerous and what seems largely irrelevant debt. There’s sometimes a rancorous theme to their despair, as if their schools and universities had promised them something and then reneged. It’s impossible not to feel sympathy for artists who find themselves in such situations, who feel they played by the rules — they went to school, in many cases graduate school, and find limited or no professional outlet to practice their craft. While you’re in that situation, when money is tight and you’re juggling a bunch of part time jobs, trying to work in your studio while the monthly payments on your student loans to lending entities that really don't care, it’s not hard to hold the school that trained you at least somewhat responsible.

But art school was never like law school, or how dentists, business people, engineers, doctors, etc., are trained. The goal of art school is to provide you an opportunity to get more textured as an artist, to work intensively and with less distraction for a number of years, to immerse you in a community of professional artists, teachers, art historians, not to mention your fellow students, many of whom will become your support structure in years to come. You may be a student at art school for four years, but you’re an alum for the rest of your life. And almost always there will initially be years of underemployment and uneven recompense for your labors, that’s the crucible out of which careers are formed. It’s the modern version of what was known in the Renaissance as the wanderjahre, when young artists left their home cities and wandered around for a time, picking up small commissions, looking at other artist’s works, learning to be a practitioner. Both, for example, Dürer and Michelangelo as young men left their cities for awhile to have such an experience.

In our own time the adjunct faculty position sometimes fills that role. My career was fairly typical, I taught part time at five different colleges, usually several at once, before I received my first full-time appointment, and I wouldn’t have been offered that without my years of adjunct work (my first year of teaching I made $3,200, and it was one of the most fulfilling years of my life). You pursue education not because something is promised, but because you are hungry to learn more about a subject or activity that obsesses you. If you are good enough and lucky enough, you’ll find that opportunities will come your way to share that obsession with others. I like to imagine that while Michelangelo was walking from Florence to Bologna, or Dürer from Nuremberg to Frankfurt, they thought to themselves that they were paying their dues, that these lean years would bear later fruit.

Of course, you don’t have to attend school at all to be an artist. Men and women of good will can disagree as to whether attending art school will or won’t make you a better artist, or to a degree that justifies the time and expense it requires. Individuals will weigh options and make choices. While the academy has been the path that the majority of professional artists have chosen for the last two hundred years, it is not a licensing agency. But if you decide to give it a go and wind up staring at me from a desk at the SAIC, don’t despair, the three hours will be over before you know it.