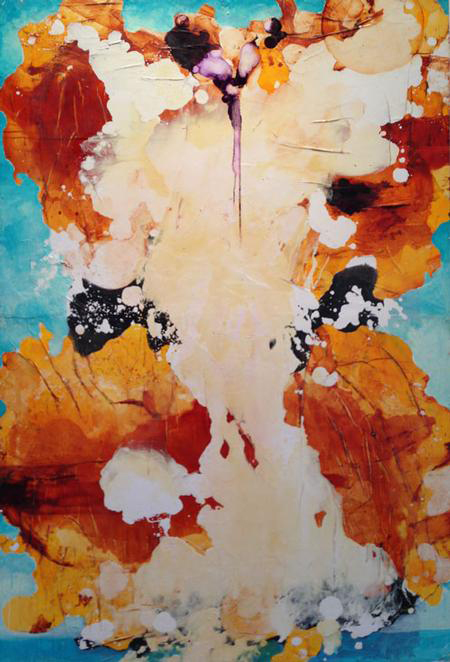 East Hampton-based painter David Geiser finesses ultramarine blue with an exuberant virtuosity that merits lofty comparison to that greatest of all blue pigmenters, Yves Klein. Over the course of his nearly three-decade career, Geiser’s powdery blues have been on brilliant display, counterposed against tomato reds, sunflower, and pocked-and-puckered passages of highly worked gold leaf. But in his current show, “Oceanic," those signature ultramarines appear only in judicious patches — yielding to expansive white space, opening up the picture planes, and trading chromatic and compositional density for a porousness that evokes sea sponges and pumice stone.

In "Hoo Doo" vaguely biomorphic forms in rust and orange zigzag across the panel, teal-ringed ovals of white paint bubbling up from within. Four discrete islands of ultramarine float at the painting’s extremities, their nubby textures rising in relief like fuzzy blue moss. Effects like these, born of a near-sculptural carving-up of thickly layered paints and varnishes, are remarkable in and of themselves but also cohere lusciously within Geiser’s pictorial universe of seeping, swirling organic shapes.