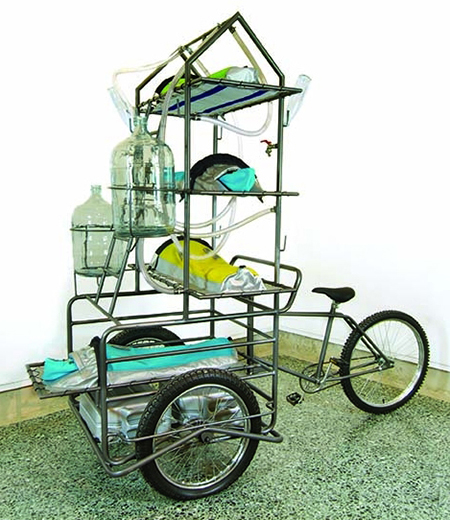 Lucy and Jorge Orta are nothing if not optimistic. The work and life partners — she from the UK, he from Argentina — converged to form their collaboration over twenty years ago; and their projects encompass design, architecture, couture and a Paris-adjacent non-profit research organization that encourages the site-specific experimental work of others. Their work, often performative and participatory, offers its viewers-cum-participants the opportunity to engage socially while simultaneously encouraging us to confront our (that is, the world's) various food and environmental crises.  This is not only a worthy but noble gesture, not to mention a tough sell. Diners at a Studio Orta event might, for instance, eat from a Royal Limoges porcelain plate (from an edition of up to 1500) atop a silkscreen-printed runner or an inkjet picnic cloth. Lucy Orta started working with recycled food way back in the mid-90s, when she took produce discards from Parisian farmer's markets and converted them to pickles, jams and purees, tapping into the zeitgeist of the Freegan movement, then just in its infancy.

“FoodWaterLife" was organized by the Tufts University Art Gallery, and its stop at Otis is two years into a more than three-year trek across the country (other university galleries included Wesleyan and Cornell). It introduces U.S. audiences to an approach that is highly mindful of sustainability, and for this venue boiled down from their on-site, performance-oriented gestures to a design-heavy, form-meets-function gathering of psuedo-interactive sculptures, customized dishware, and drawings.

Lucy + Jorge Orta (as they're officially referred to) have been carrying out their ambitious enterprise of situational performances (elaborate and massive collective dining) and installations (a symbolic encampment in Anarctica featuring their flag- and glove-bedecked tents), and subsequently exhibiting their tricked out and smartly if antiseptically designed equipment mashups with a purpose in mind. It is their objective to engage in practices that call attention to the world's numerous impending (or existing) crises — primarily food and water shortages and our ever-mounting environmental threats.

This traveling show encompasses objects from a selection of the couple’s wide-ranging projects: "Hortirecycling (food), ”The Meal Acts (food),” "OrtaWater (water),” "Life Line (life)" and "Anarctic Village (life)" projects. The Ortas operate in a space that merges design, sculpture, fashion, installation and performance, along with accents of social justice. Yet taken out of the sites of their social actions, the reliquary objects on their own may tend to succumb to the tenets of design at the expense of art. That is to say, the potential bite of the work can give way to more pedagogic tendencies.

In thinking about communal dining experience as art, it would be unwise not to mention Rikrit Tiravanija, who prepared Thai meals for art world colleagues in downtown New York galleries in the early '90s. Indeed, the catalog essay "Food Service: Setting the Table," by Ellen Lupton, not only mentions Tiravanija, but also Gordon Matta-Clark, the sculptor known for carving out sections of houses, who also ran the restaurant Food, also in downtown NYC, in 1971. The curators and writer deserve credit for making the references. For Tiravanija and Matta-Clark, their meal hosting provided a context for their other work, lending it a certain caché. Tiravanija's events carried heavy doses of art world cool, and exclusivity, and for that may be regarded with heavy doses of skepticism. Until Studio Orta's "Meal Acts" reach more communities in the U.S. (the Meal, act VIII took place at the International Design Conference in Aspen in 2001), it remains to be seen what kind of impact they have stateside. For now we are presented with the forged ephemera from "Meal Acts" and events like it, consisting of “Hortirecycling" and “OrtaWater" units that merge the sensibilities of Zabar's [A Kosher gourmet store on New York’s Upper West Side—Ed] and REI (Recreational Equipment, Inc.).

While Tiravanija's work has translated from stage to gallery thanks to an oeuvre made up of different styles of work, with Studio Orta that translation is less fluid, as the aforementioned design = pedagogy challenge is inevitable. There are of course exceptions, most notably "OrtaWater — Bottle Rack," a large Duchamp-style bottle rack filled to maximum capacity with clear drinking bottles and crowned at the summit by a Sparkletts-sized glass water jug. The "OrtaWater — Mobile Intervention Unit" is another strong piece — a bike refabbed with simple metal shelves and interconnected tubing designed for maximum rehydration delivery — that lends an appropriate air of urgency. Otherwise, the works in this gallery may very well raise more questions around preaching-to-the-converted and art vs. design vs. engineering, than it will incubate production-based think tanks for addressing the challenge of rapidly receding planetary resources.