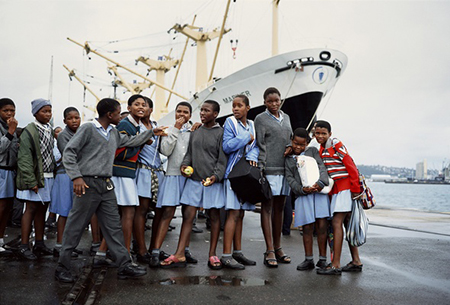 Alan Sekula, in addition to being a visual artist who worked in photography and film, was also an influential teacher, theorist, and photo historian. He taught at Cal Arts for many years and had a lasting effect on those who learned from him. He had the rare ability to make heady as well as visual works that never followed any trend, yet in the end were trend setting.

The images from "Ship of Fools," the last series before his death in 2013, anchor his achievements as a visual thinker. Sekula's work often delved into maritime themes that stemmed from his interest in issues of labor, transport and globalization. The images on view include photographs of dockworkers and chip's crew, night time views of docked ships, as well as a photograph of the churning water from a boat's engine. The works play off each other and while they are compelling as visual images, its only through Sekula's texts do their intentions become clear.