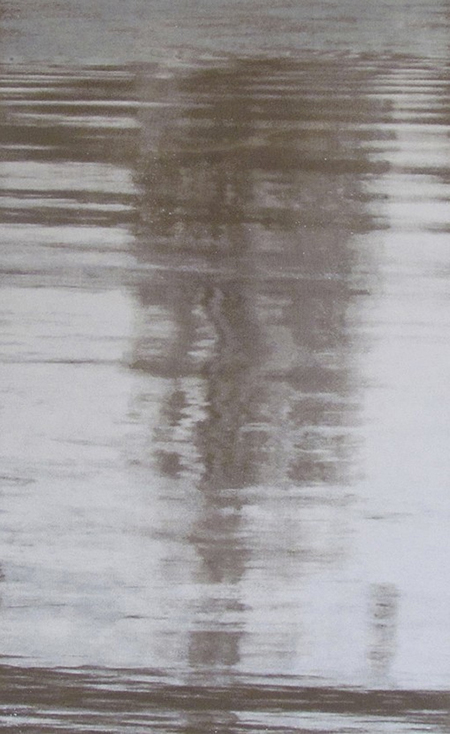 Memory’s fickle nature flows through us like water in a riverbed. Ilona Pachler’s current work explores memory, place, and events through silkscreened photographs. They are reflective compositions of mostly abstract waterscapes inspired by two major events that she recorded: the hundred-year flood of the Danube river in 2013 and the flooded subway stations during Hurricane Sandy in 2012. She continued working on the series in New Mexico and cites a Japanese haiku by Choji Ni as the basis for these “visual poems.”

“Water, Floods and Gauges” is very subdued with soft, almost monochromatic palates. The two New Mexico images, both titled “Sunny,” are in a blue and beige so characteristic of our clear skies, yet that relay a blurry, vague sense of place. Water is very recognizable in these Gerhard Richter-like streaked silhouettes copied from the original photos. The silkscreen process itself leaves tiny regimented pinpricks that subtly diffuse shapes. Pachler’s serigraphs render the various events and locations indistinguishable from one another, an effective comment on the immeasurability of memory.