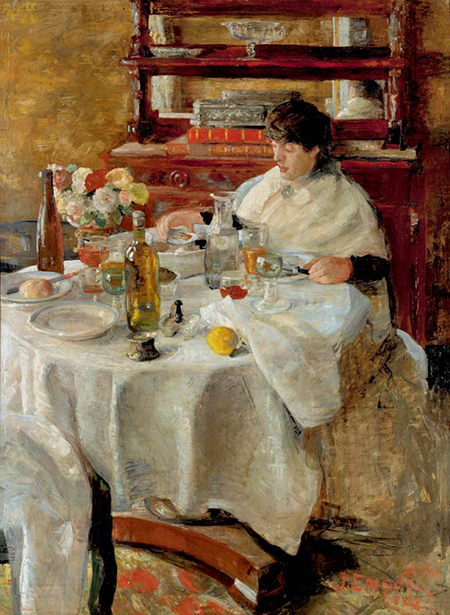 James Ensor (1860-1949) had two brilliant careers, first as an avant-garde Realist and then as a forerunner of modern Expressionism. During both phases, he created radiantly beautiful and deeply haunting images.

The artist was born and spent most of his life in the small coastal town of Ostend, Belgium. His mother's family owned a souvenir shop that sold everything from Chinese imports to Carnival masks to taxidermy specimens. The young Ensor left home in 1877 to study at the Royal Academy in Brussels, where he became enamored with historic figures like Bosch and Rembrandt, as well as then modern masters Goya, Turner, Courbet, and Manet. Perhaps his most Manet-like canvas is "The Oyster Eater" (also known as "In the Land of Colors," 1882). A matronly figure sits at a round table piled with bottles, glasses, a vase of exuberant peonies, and, of course, plates of the silvery shellfish. A bottle of white wine at the far edge of the table sparkles with all the scintillating magic of the glass in Manet's "Bar at the Folies Bergere" (also 1882).

When the Brussels avant-garde group L'Essor (The Soar) refused to exhibit Ensor's "Oyster Eater," the artist and several of his colleagues founded the even more avant-garde Les XX (The Twenty), which exhibited not only Ensor's work, but also that of international superstars like Monet, Gauguin and van Gogh. In addition, Les XX sponsored concerts by Claude Debussy and lectures by Stephen Mallarme, to give just two examples. Even as he was co-founding Les XX, Ensor was making a break from his early modernist roots. Indeed, he remained an active member of the group for only one year.

Part of the reason for the break was aesthetic. As early as 1882, Ensor penned "Reflexions sur l’art," in which he rejected the "objectivity" of classic conventions in favor of the "intrinsic sensitivity of the artist." That is, he turned away from external realism as a goal and began to favor internal exploration of psychological depths.

Another reason for Ensor's radical shift seems to have been personal. The rejection of "The Oyster Eater" wounded the artist deeply. He began to doubt even his best friends, people with whom he had worked and painted for years. On top of this, his family denied his request to marry the woman he loved. He responded in 1888 with a rude parody of a photograph of his friends in Bruges: "Hell Under, Hell Above, Hell All Around" is a drawing of four middle-class figures seated on a bench, oblivious to the three horrific beggars flanking them. Below the central seated figure is a large pile of excrement.

Ensor abandoned the avant-garde turmoil of the capital city and moved back to the studio above his mother's curio shop. Soon after his return, the artist began to transform the glowing realism of his early work into the disturbing, mask-haunted oeuvre for which he is best known. The Getty owns Ensor's masterpiece "Christ's Entry into Brussels" (1889), a tsunami of people flooding over an immense, claustrophobic picture plane. The hundreds of parading figures, most of them masked and costumed, are framed by quasi-architectural constructions and political banners: "Vive La Sociale" (Long Live Socialism!) in red at the top and "XX" (an allusion to the avant-garde art organization) in green just below. The figure of Christ, riding a donkey, as He did on His last entry into Jerusalem, would be lost in the carnivalesque masses if it were not for the outsized gold halo that encircles His small face.

In 1895, Ensor created "Skeleton Painting," a self-portrait in his cramped studio. The artist stands at the easel with palette in hand, gazing out at the viewer. His face is covered with a skull mask that seems to smile in secret knowledge. Tottering at the triangular top of the easel is yet another skull, looking rather askance at the painter. We have to ask, as we must ask of any image of an artist staring out at the viewers while he works: Is he painting me? Is he painting the external world as he sees it? Or does he see beyond/beneath the surface? Does he paint how he feels? And this artist in particular, is he painting the face of mortality?