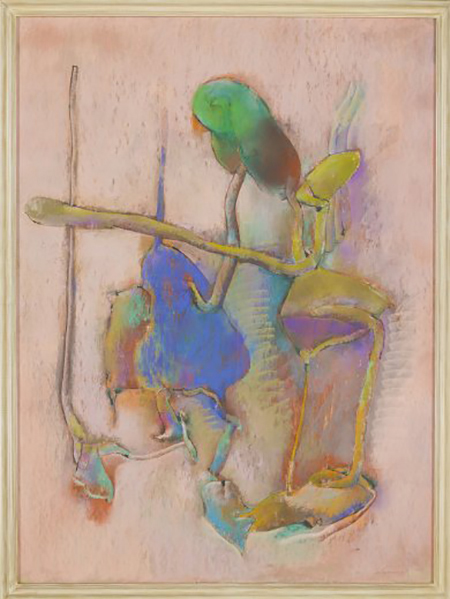 John Altoon, deceased more than 40 years, is having a resurrection with a few recent appearances of his work in SoCal exhibitions now topped with this major retrospective of 70 paintings. For those familiar with his “Ocean Park Series,” this exhibition looks back at 18 of these works — with their white backgrounds, spontaneous abstract expressionism and a distinctly California 1960s look. The show also contains several less familiar works, displaying Altoon's figure drawing training, commercial illustration background, as well as concern with the social/political themes of the mid-20th century.

“Jazz Players” (1950), a close-up of a pair of saxophone players, one black, one white, is an earnest 25-year-old’s carefully drawn and composed portrayal of the nightclub scene. “Untitled (F-8)” (1962-63) is a suited and hatted couple; the woman, nude from the waist down, expresses that era’s new sexual liberation. “Untitled (F-24), lettering by Ed Ruscha” (1962-63) is an ink and watercolor drawing of a man and woman boldly facing each other, that also contains a tube of Colgate toothpaste and the advertising rhetoric, “Who Won, when clinical testing compared Colgate Dental Cream with the most widely accepted fluoride toothpaste?” The artist’s “Untitled, 1964, lettering by Ed Ruscha” is a lifelike drawing of a rifle brandishing Lee Harvey Oswald, alongside a defiant Tarzan, the latter wearing the drooping mustache favored by the artist. The upper right corner features the “Life” magazine logo, while the lower left reads, “Tarzan and I watering the lawn the day it happened.” For those who recall Altoon as a brilliantly eccentric abstract artist who died prematurely, this exhibition provides a broader perspective of his skills and political persuasions.