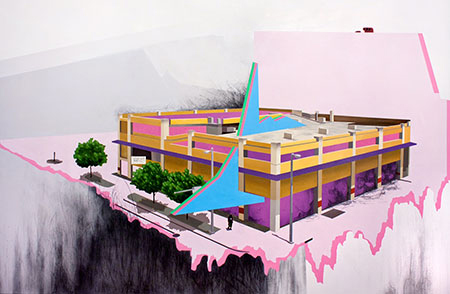 Although George Grochocki and Shayne Murphy share an interest in geometric forms, their work is more dissimilar than alike. Polish-born Grochocki, who splits his time between Warsaw and Houston, has spent nearly half a century constructing a body of work in the tradition of minimalist art. Emerging Houston artist Murphy is still developing his vocabulary and technique. Grochocki limits just about everything in his work, including his shapes (the square dominates this show) as well as his palette, which he restricts to white, black, silver and gold. These sparse but elegant wall-dependent pieces are characterized by symmetry and precision, as well as an absence of modeling and texture. In his statement, Grochocki enunciates his concern with space, color, proportion, rhythm and sequence. The artist draws parallels between his work and that of classical musicians such as Bartok, Bach and Schöenberg. He also refers to his pursuit of perfection, while cautioning that it exists only in the imagination. Historically, Grochocki’s work relates to artists who reacted to the aggressiveness of Abstract Expressionism — such as Kenneth Noland, Ad Reinhardt, Thomas Downing —  by taking a more dispassionate and orderly approach to art in the 1960's.

Murphy combines elements of realism with geometric abstraction to create inventive paintings that combine precisely modeled geometric forms with areas of expressionistic drawing. “St. Helena Discotheque” shows a multi-level parking garage that happens to be across the street from where Murphy works out. He uses its cube-like structure as a starting point and situates it on a rectangular shelf floating above a dark chasm. Colorful stripes, as well as two graph-like forms give it an unreal quality. In six small pieces Murphy works out his vocabulary of geometric shapes, expressionistic scribbles and simple figure-ground relationships. The most commanding paintings here are “Blight” and “Calamity,” two figurative paintings on the back wall. These sexuality ambiguous creatures suspended in air have a super-hero feel about them, suggesting not so much contemporary characters as Greek sculpture like the bronze Zeus hurling a thunderbolt. These figures are at rest, but it appears they could attack at any time, using the pointed shapes on their backs as weapons. This recent MFA graduate is definitely an artist to watch.