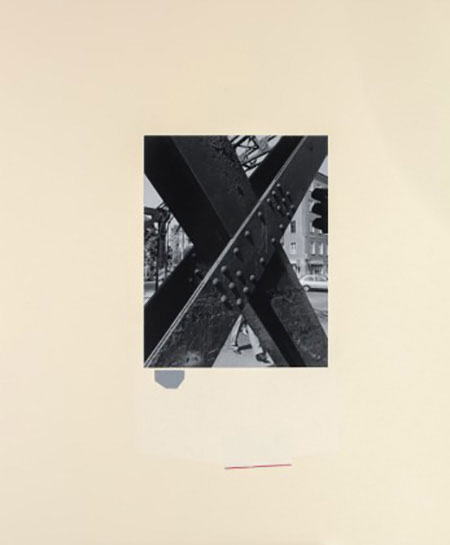 ”I walk 47 miles of barbed wire...” John Gossage’s mixed-media photocollages don’t overtly reflect the raffish braggadocio of Bo Diddley’s song, but they do reflect the experimental nature of these modestly sized hybrid works, combining silver-gelatin images accentuated by small rectangles of colored paper that are mounted on neutral-toned museum board. The veteran photographer dubs this series, made in the 1990s, as ‘photographic distractions,’ which may reflect the diversionary nature that they had for him. Certainly a sense of play informs them, due to the eccentric placement of the elements and the interplay between photographic and cut-paper elements, transparency and opacity, illusionism and abstraction.”Berlin" (1992), for example, pairs a black rectangle (photographed though indecipherable) with pale blocks of color, one suggesting a mansard roof, with several of the planes overlapping — an intimately scaled Malevich. A 1997 work of the same title presents a view of architectural structure in a landscape adorned with subtly colored papers placed off-kilter that would suggest a framer’s mistake were they not so perfectly situated. The light brown and beige rectangles suggest aged paper or tape, but also shadows and, in the gallery, reflections of artworks on facing walls, adding another dimension of playful mystification. “Berlin” (1995) presents a photo of the diagonal intersection of two beams, shining with rivets and viewed from an angle so as to lead triangle-shaped windows into the street scene behind. Add the humorous touch of a man’s striding legs at the bottom, bearing the weight of the entire chiastic composition. Great stuff.

Also on view is "Where There’s Smoke," a four-person show that also refers to creative fire or creative destruction. Photographic purism — and especially the notion that the camera cannot lie — is treated with a certain digital-age levity. Ruth Van Beek’s brightly-hued collages — all entitled "Untitled (The Arrangement)” — begin with photographs of floral displays. The artist collages biomorphic blobs of painted paper to them in witty ways so that the elements interact and collide, nicely synthesizing various interpretations of the same subject. Viviane Sassen’s color photographs, which she calls “Axioms," resemble Suprematist abstractions, with their red and blue diagonal planes floating in an indeterminate, infinite space. But Sassen constructs setups in sand or on tabletops, photographs them, and then adds paint (or Photoshops), conflating the idealist abstraction of a century ago with modern homage leavened with parody. Michael Lundgren and Jason Fulford adhere more closely to the traditional photographer’s aesthetic of finding readymade subjects in the world and presenting them optimally. Lundgren’s images from the western desert find a mysterious, austere poetry in dilapidated machinery and other artifacts, a bit in the spirit of the Romantic/Surrealist Frederick Sommer. "Reversal of Terms,” "The Algaeic Fox" and “Untitled" are enigmatic in the best way. Fulford’s objets trouvés come from the surreal urban wasteland: a pyramidal stack of books or cascades of icicles in two photographs entitled "Elmira, NY;" a broken red ladder in "Staten Island NY;" a classical bust in “Bermuda;" overlapping metal grids and trees in "Athens, Greece;" a storefront display of light bulbs in "San Francisco, CA.”