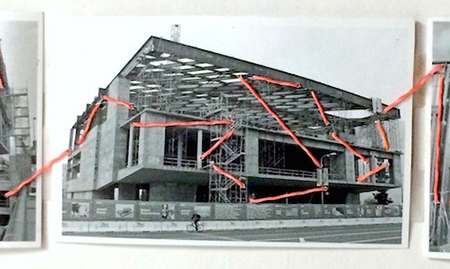 Nancy Popp is best known for her performative interventions that explore the body's relationship to physical spaces. She often scales walls or climbs poles, cascading her body up, down and across architectural spaces. The sites of her recent interventions are incomplete buildings that are still under construction. They appear skeletal, framed but not yet covered. Her exterior works call attention to the architecture of the site, but it is really the way the body moves through these unfinished spaces that interests Popp. Her movement is recorded through video and photographic documentation, as well as through Mason Lines (heavy duty strings used by contractors for laying out excavation sites that provide straight lines for construction) that are tied to the structures tracing the paths of her journey. These bright orange lines remain at the end of a performance, crisscrossing and subverting the rigid grid structures they were designed to delineate. Popp performs indoors as well as out. Her interior performances often occur during gallery openings: audiences watch as she constructs temporary walls from white backdrop paper, which she then scores and later walks through to create a large hole. The documentation and the ripped paper remain for the duration of the exhibition.

Performance-based works rely on photographic and video documentation because that is usually all that remains. Popp understands the difficulties of bringing durational work into a gallery setting and thus makes a point of transporting what occurs on site into the gallery. Here she constructs a temporary wall that bisects the gallery entrance. From the back the wall is clearly unfinished, referencing a building under construction. The verso contains a mural of one of the construction sites where Popp has performed. This mural, as well as two others are mounted in the space, perforated and then stitched together using the Mason Lines which become an installation of crisscrossing orange pathways. Two performances coincide with the exhibition: one during the opening, where Popp perforates the entry wall and threads it with Mason Line. At the closing of the exhibition she dismantles that same wall. Smaller photographic images of construction sites also perforated and stitched together with Mason Lines dot the gallery walls.

In the gallery's back/project room Popp contextualizes this installation though video and photographic documentation of past performances. Excerpts from both interior and exterior interventions include a 2013 performance in which she scaled the construction site of the Broad Museum; a performance at the 2014 Dallas Biennial in which she climbed a large pole on a construction site in an area of town that was being gentrified; and excerpts from "Narrative Spaces" at Venice Arts last year, where she pulled apart two pieces of drywall, creating at first a small slit which was eventually enlarged enough for her to crawl through. She then suspended large sheets of backdrop paper across the hole, sliced a line and burst through it.

Popp's mixed media interventions are rooted in activism as well as referencing the history of performance art. She pointedly asks what it means both personally and globally to use the body as a site and explores the agency of an individual in public space. She examines the presence of a feminine body in a male dominated site (construction) — while acknowledging the necessity of that body being fit and able to perform. Injured in a motorcycle accident in 2013, Popp experienced first hand the body being stitched back together and the knitting of a community — those who were there to tend to her during her recovery. This experience will be transformed into yet another new work installed outside the gallery: a Mason Line Hammock. A fully functional hammock created via a knitting circle — people working in tandem towards a common goal — this bright orange hammock offers respite from the hustle and bustle of urban life.