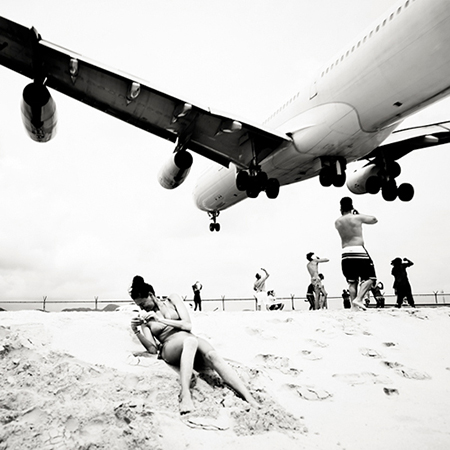 Images of white sandy beaches, palm trees and sunbathers conjure up thoughts of a peaceful, quiet vacation. But Austrian photographer Josef Hoflehner had something else in mind in his series “Jet Airliner,” which examines beach life at Maho Beach on the Dutch/French island of St. Maarten/St. Martin in the Caribbean Sea. This beach is uniquely positioned directly adjacent to Princess Juliana Airport, where Boeing 747s land through the course of an ordinary day. Working with two classic Hasselblad wide-angle cameras, Hoflehner set up shop on the beach during four trips to the island everyday during a two week period between 2009 and 2011. Waiting sometimes hours between plane landings, Hoflehner had only a split second to take each shot. The result is a series of black and white archival pigment prints, 22 x 22 inches. The image of the jets in each photograph feels like a superimposed image in an otherwise seemingly pristine-looking tourist brochure for St. Martin.

The photographs are in fact not composites and the situations with the people on the beach were not pre-set or posed in any manner. Some of the folks on the beach are sunbathing, seemingly oblivious to the planes flying overhead; others are ready with their own cameras; still others are plainly annoyed by this disruption. The close juxtaposition of the planes (sometimes flying as low as 13 feet from the ground) and vacationers putting up with these kerosene-smelling, noise-roaring monsters that interrupt the tranquility simply gets in your head.