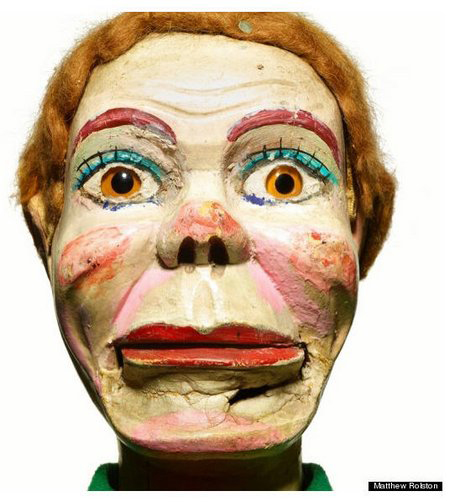 On display in Matthew Rolston's exhibition, entitled "Talking Heads,” are large-scale color photographs of ventriloquists' dummies. Rolston had access to the Vent Haven Museum in Kentucky's collection of over 700 dolls, dummies and masks. With dates ranging from 1820-1980 the array of characters becomes a compelling catalog of not only doll making but the ventriloquists' sense of self. Each doll or dummy was photographed against a white background and is printed to a larger than life-size square.

The details of the painted forms resonate emotionally as we encounter the differences in the expressions and the materials used for eyes. A quintessential ventriloquist's dummy is a cliché — they are always more than just a doll with exaggerated features. Rolston's images depict a range of figures with an attitude of compassion. Some are women, some are more animal-like, some have painted eyes while others are frighteningly human. The dolls’ vacant states are uncanny, holding your gaze but offering nothing in return.