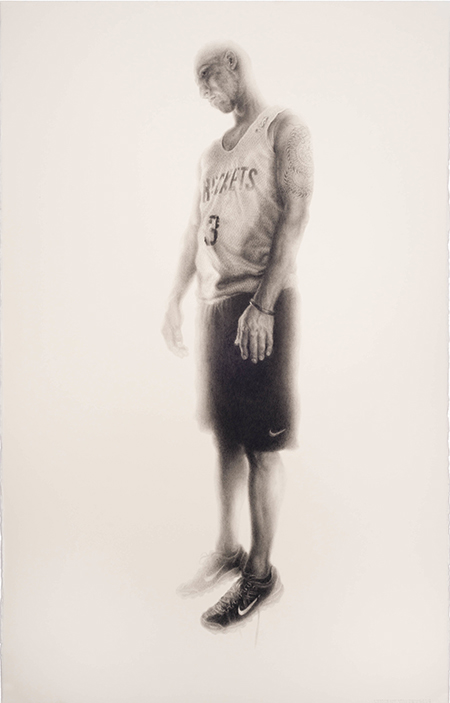 The figure is a point of reference for the four artists in the exhibition "Parallel Myths," but each has their own distinctive result. Michael Bise frames his figures — a woman on a balcony in “Between You and Me” and a portrait of Christ in “Jesus Christ!” — with dark areas that focus attention on the figure. Known for his facility with graphite on paper, Bise uses strong contrasts of light and dark for dramatic effect in these large drawings. A flaming halo emanates from the head of the Christ figure, and the riveting gaze of his dark eyes is intensified by his pale face, long dark hair and beard.

Vincent Valdez is an equally adept draftsman, but by contrast his figure drawings are built up against lighter grounds. His touch is softer than Bise, contributing to a near-photographic effect. The five drawings are presented as a single suite entitled “The Strangest Fruit,” referencing the song most associated with Billie Holiday’s 1939 recording. All but one of these figures appear to be hanging from an invisible noose, and three have their hands arranged as though they are bound. The effect is unsettling but not surprising, as Valdez is part of the socio-political Chicano art movement. He uses male figures to express the human struggle; in this case, a basketball player, a tattooed man, a man in a western-style shirt and two other males are no longer able to continue their resistance.

Joey Fauerso’s four landscapes, some with male nudes placed in mysterious juxtapositions within the environment, play on the longstanding equation of nature with sexuality. A kneeling male nude turns his head to stare impassively at the viewer in “Shoreline,” while the figure implied in “A Good Man is Hard to Find” is absent.

In contrast to the other three artists, Keith Mayerson works with an abstract painting vocabulary but is equally engaged with the figure. Distorted faces coalesce from a hallucinogenic stew of color and motion in “Large Iconscape.” Although primarily abstract, this painting seems to express allegorical content that relates to the world yet transcends the particular through its formal nuances.