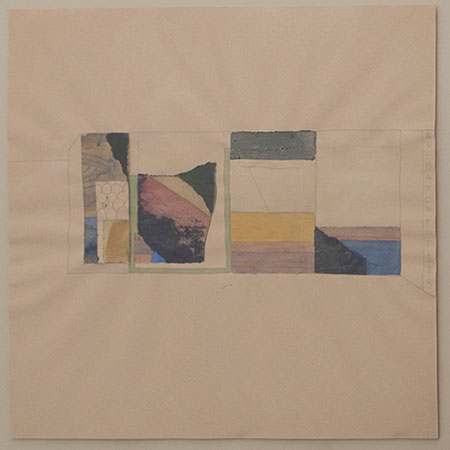 In "Secret Exhibition: Six California Artists of the Cold War Era," Rebecca Solnit quotes the poet Michael McClure on postwar San Francisco: “… a hotbed of liberalism and Pacific Coastal rim ideas and environmental consciousness at its early stages where one could live in a lovely apartment with a view and low rent that an artist might be able to afford.” Now that this city of nonconformists is being transformed by sky-high rents, the Beat Era now looks better than ever to beleaguered artists, and it’s easy to feel nostalgic for a city that we, unlike the San Francisco columnist Herb Caen, never actually knew.

We have the art, of course, from the period, which in its stubborn individuality and even willful obscurity resists co-optation into mere cultural capital of the sort that much contemporary art and its support systems seem to welcome. "Oh How Much It Hurt: Fred Martin and Friends in the Fifties," curated by John Held, Jr., reminds us that modernist art — before Pop made art safe for suburbanites, parvenus and money-launderers — was a subversive and intensely personal adventure in self-expression with scant career prospects. Not quite the good old days of artist-priests, but certainly a time when being an artist indicated a fundamental seriousness of purpose.

Martin is a well-known Bay Area painter, teacher and administrator with a long and illustrious career at the San Francisco Art Institute, and scores of memorable, illuminating Artweek editorials. In a recent interview with the San Francisco Chronicle’s Kimberly Chun, he described his role as “basically, a builder. A builder of the community of artists.” Now eighty-seven, this former student of David Park, Mark Rothko and Clyfford Still, as well as a classmate of Jay De Feo and Sam Francis, is showing his personal collection, which includes works by himself and friends De Feo, Roy De Forest, Wally Hedrick, Deborah Remington and David Simpson, most of which have not be exhibited since appearing on the walls of the Six Gallery in the mid-1950s, where Allen Ginsberg first read his anthemic Beat poem “Howl" in 1957. Martin had paintings in that show.

Writes curator Held of the occasion: "While Jack Kerouac shouted, 'Go! Go! Go!,' at the event, Martin’s abstracted cityscapes, painted on Masonite while leaning on the steering wheel of his car as he traversed The City, captured the transition from abstraction to figuration, which would come to dominate San Francisco’s artistic climate by the end of the decade."

With twenty-three works, mostly of modest size, it’s a personal show, reflective of Martin’s poetic sensibility. "Oh How Much It Hurt" derives its title from a 2014 watercolor that features the words in white paint atop a black oval. This wry note reflects Martin’s equation of visual and verbal. In the previously-cited Chin interview, he reflected, ”I always hear sounds in my head and sentences telling me what I’m doing. I’m talking to myself all the time and painting, and I began to let the words and images go rushing together, and after a bit I began to use collage as a way of doing it, using scraps of newspaper.” If Martin’s and other Beats’ predilection for poetry makes viewing their works akin to reading, their love of cast off material links them with their Cubist forebears, especially the German Dadaist Kurt Schwitters.

That intimate personal quality informs Martin’s small-scale works in watercolor, distemper (a water-based paint incorporating glue and chalk), hide glue, pencil and collage on paper now darkened with age, like “Untitled 2 (Sunday Chronicle)” and Untitled 1 (Bay Area).” A somber-hued oil, “Untitled (Pyramid)” from the mid-1950s that suggests both the Transamerica Building and Philip Guston’s Klansmen. Three shelves of small paintings on canvas and board from the same period combine the artist’s interest in travel imagery and in loose, painterly facture, with one or two exploring male sexuality using Dadaist absurdism. A group of four new (2014) watercolors with strong central oval forms (one containing a large question mark) retain free, expressionist brushwork.

Martin’s friends in the 1950s are nicely referenced in a selection of strong paintings and, in the cases of DeFeo, Hedrick, Remington and Simpson, via evocative black and white photo portraits by Jerry Burchard. DeFeo’s 1955 oil of a flower vase atop a table, each petal depicted with a precise brushstroke but the rest of the painting done with painterly brio, is entitled “Landscape with Figure.” This pairs nicely with Burchard’s portrait of the alluring artist in her bohemian digs. Two of Remington's strongly gestural oils from 1953, “Untitled (Abstract)” and “Untitled (Portrait)," contrast with the cool, wary persona of Burchard’s portrait, with the artist seated, barefoot, beneath a syncopated arrangement of Buddha photos.

A 1959 Simpson abstract watercolor, “Brown and Blue Stripes #3,” is paired with a photo of the artist, in shorts, smoking, amid similar paintings, his chest traversed by striped window-mullion shadows. A Hedrick watercolor from 1956, “Between the Axes,” is suggestive of Paul Klee and Jean Dubuffet. It might be a painted version of the sculptures nestling behind the seated artist, sporting jeans, a T-shirt and welding goggles. DeForest’s large oil “Ethel” (1959) shows the painter working abstractly — there’s no Ethel that I can find — but with the joyous energy that marks his later fanciful figurative works.