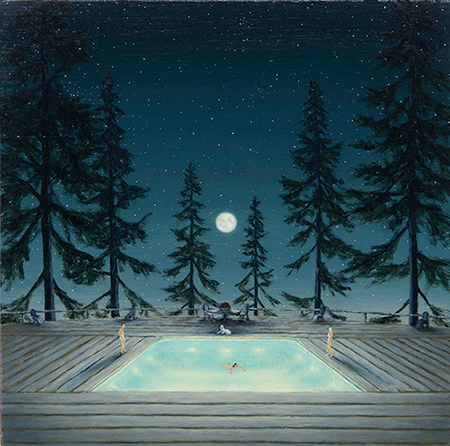 It’s a bit astonishing that Dan Attoe has never had a solo show in Portland, Oregon, where he lives. But Attoe has been blessed with such a degree of international exposure that he’s had the luxury of discretion. Portland art viewers have seen a few of Attoe’s pieces in group shows at Elizabeth Leach Gallery and, in 2008, at the Portland Art Museum’s Contemporary Northwest Art Awards, but it’s a rare pleasure to see a solo exhibition here devoted to his diverse practice.

Drawing has always been central to that practice; he makes a drawing each day, and the examples showcased in this show counterbalance lowbrow-style pictorial imagery with enigmatic, brain-twisting text. His paintings are more earnest, less risqué, than earlier paeans to truckers and strippers, and often depict the Pacific Northwest’s natural wonders:  a sprawling cascade in "Swimmers at Waterfall" and a moonlit outdoor pool in "Swimming Pool at Night 7," reminiscent of the pool at the historic Timberline Lodge on Mount Hood. An agreeably garish neon and mixed-media work, "I know more than you think I do," offsets the immaculate elegance of the show as a whole, which is inventively installed in this small but pristine space.