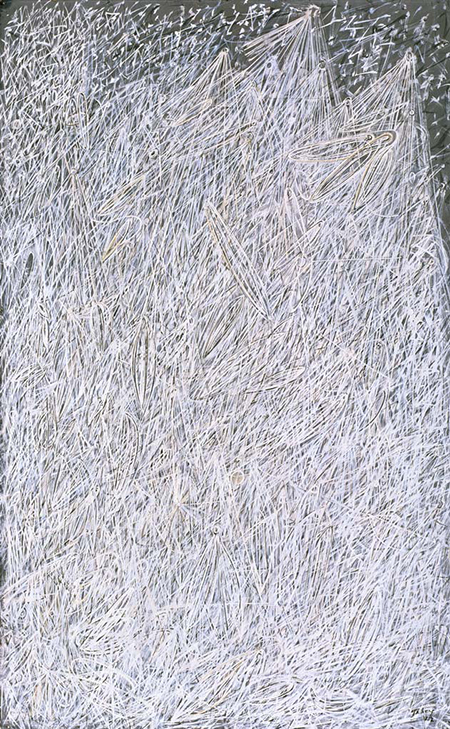 Both continuing through September 7, 2014

As dazzlingly laid out in a summer blockbuster show at Seattle Art Museum, “Modernism in the Pacific Northwest: The Mythic and the Mystical” adheres to a tighter curatorial logic than its 2003 predecessor, “Northwest Mythologies,” at Tacoma Art Museum. SAM’s own collection, gifts by the founders, trustees, donors and supporters that have made their holdings of the group the biggest and deepest — if not the best — in the nation form the core. Considering the quartet — Guy Anderson, Kenneth Callahan, Morris Graves and Mark Tobey — began with the patronage of Richard E. Fuller, the original director, this makes sense.

For the public, this is a tremendous asset, but Anderson, Callahan, Graves and Tobey are not shown in full dress here. Rather, the museum’s canonical greatest hits are on view with new accessions bound to become iconic pictures themselves. The last thorough undertaking at SAM to cover the period, “Northwest Traditions” (1978) tried to do too much and ended up delivering too little. Important out-of-town loans were omitted. TAM’s “Northwest Mythologies” was about the same size as “Modernism in the Pacific Northwest” is, but one-third of that show's entries were loans from prestigious East Coast art museums. Such treasures amplified the TAM show in ways that are not apparent in the present show. For the first time, everyone could see what New York, Philadelphia, and Washington, DC had been raving about.

Given the bias of the Hatches (Mrs. Hatch grew up with the Graves family), Graves becomes the star of the show and Kenney is annexed in as No. 5 of the Big Four. Displayed in a huge gallery all his own, Kenney brought a huge dose of 1940s Magic Realism, as in “Glorified One” (1945). After he discovered mescaline, let’s just say the paintings took a lot longer, an example being “Amaranth” (1966). He painted almost exclusively for the Hatches for years and largely stopped exhibiting in galleries.

Despite Kenney’s anointing, by and large Graves and Tobey dominate the show. Curator Patricia Junker is excellent at nailing down the origins of Tobey’s “white writing,” as well as chronicling their feud when Graves’ 1942 Museum of Modern Art debut caused a publicity sensation. Graves shamelessly lifted the older artist’s “white writing” in ways that made it resemble birds defecating on rocks. Junker has uncovered and acquired long-unseen masterpieces such as Graves’ “Bird in the Night” (1943) and Tobey’s “White Night” (1942) and “Retreat of the Friend” (1943). His “Parnassus” (1963), a rare oil-on-canvas and seven feet high to boot, was praised by critic Clement Greenberg and subsequently acquired by his Seattle friends, Bagley and Virginia Wright.

Callahan and Anderson remain the odd men out although, to be fair, Graves outlived them both, to age 91. For different reasons, both reputations have faded and faltered. Could it be Callahan peaked early and Anderson was a late bloomer? Even so, Callahan’s substantial strengths are amply on view. More than the others, he reinforces Junker’s point about the horrors of World War II driving all their art. Hellish landscapes with teeming crowds still look haunting and powerful, that is, when they haven’t faded or darkened due to the aging of the tempera paint they all used. SAM has key works such as “Seventh Day” (1953) and “First Seed into Last Harvest” (1943), replete with Christian symbols of agony and guilt. Callahan was better served in Tacoma by three masterpieces borrowed from East Coast museums.

The last gallery concludes with Anderson, whose work is a weak link. His breakout year occurred in 1976 when he was 70, long after the sludge piles presented here were painted. “Search for the Morning” (1950-52) is a big brown landscape with horse and riders, a theme that would be perfected years later and is concurrent in the Woodside/Braseth Gallery spinoff show, “The Visionaries of the Pacific Northwest Revisited,” especially their 1986 “Edge of the Sea.” The best of the late-period Andersons should be the next acquisitions goal for SAM’s otherwise enviable collection.

With spacious installation, superior lighting, discreet labels, and prime allocation (the 10,000-square-foot temporary exhibition space), this is an exhibition that deserves to be widely seen, but will not travel. Because Tobey and Graves both had impacts on the rest of American art, far beyond the area in which they settled so long ago, they brought Pacific Northwest art into American and, in Tobey’s case, European art. For that, they deserve all the honor they can get.