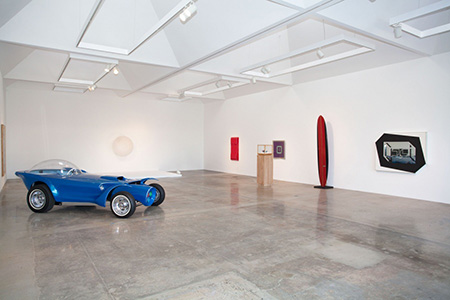 “Surface to Air: Los Angeles Artists of the Sixties and the Materials That They Used” may be the first show to contextualize art born out of the air and space industry, not only simply by intimating its more mainstream cultural counterparts but by actually including seminal examples of them — a vintage Hobie surfboard, made by Hobie Alter himself, and Ed “Big Daddy” Roth’s “Orbitron” custom car each stand amidst Larry Bell’s glass and mirrored boxes, Billy Al Bengston’s lacquered chevrons and of course John McCracken’s leaning fiberglass planks, the latter still resonating as the epitome of “fetish finish.”

While the juxtaposition of these respective wider and narrower cultures (‘high’ and ‘low’ doesn’t apply here — too discrediting) more fully fleshes out the greater gist of the zeitgeist, the presence of the car and surfboard, mint as they are, does inevitably lend an air of datedness, even though new works mix seamlessly with vintage pieces.  Still, Robert Dean’s curation and the show’s appropriately smooth title are smart and museum quality. And the rare opportunity to catch classic Ron Davis, Craig Kauffman and Robert Irwin in concert — that’s no mean feat.