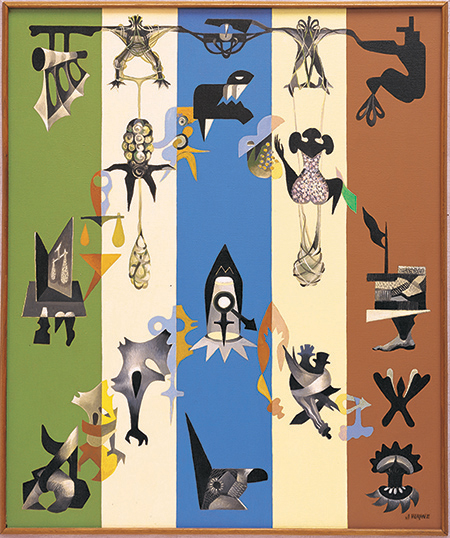 June Wayne had a very long and productive career, spanning over six decades, and most of us have seen only a fraction of what she made. This wonderful survey of her work has been thoughtfully curated by Betty Ann Brown and Jay Belloli to display the great range of her work and vision. Of course, we tend to associate Wayne with lithography, for she not only produced well-known lithography series, she was famously instrumental in reviving that medium in the United States. With a grant from the Ford Foundation, she established the Tamarind Lithography Workshop in Los Angeles in 1960, and ran it for a decade. There artists were able to work with master printers to create fine art prints.

Her own first lithograph at the workshop, “Dorothy, the Last Day,” was the beginning of one of the artist’s best known series, “The Dorothy Series.” While that print depicted Wayne’s mother on her deathbed, the artist eventually reclaimed Dorothy’s vibrant life by going back to the beginning, incorporating old photographs, posters, newspaper clips, and other ephemera. Half a dozen or so from the series are included here, including an old photo of the girl Dorothy, shown in the negative, when she arrives in the U. S. in 1907 with members of her family. The series traces her two marriages, two divorces, and a 25-year career employed by a corset firm.

My own personal favorites are at the early part of her career, when she was painting, and towards the end, when she was applying patterns of styrene shapes to wooden boards and painting them in metallic tones. The first gallery includes “Cryptic Creatures” (1948) and “The Chase” (1949) from the Kafka series, in which vaguely anthropomorphic creatures dance and pirouette their way up and down or across a striped canvas. There's something delightfully carnivalesque about these. In the early 1950s she became fascinated by geometric patterns, as reflected in “The Dreamers” (1952) and “Final Jury” (1954). The styrene works from the late 1980s are made from what appears to be packing material, and evoke explosions and cosmic swirls. These also reflect Wayne's fascination with pattern, as well as her continuing courage to use new media.