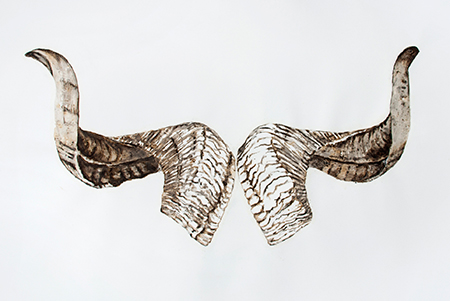 Over the past half-century or so, the elusive “masculine ideal” has progressed from strong, stoic reserve, exemplified by Hollywood stars like John Wayne and Henry Fonda, to the hyper-verbosity and emotional availability of Alan Alda and Woody Allen, to our current era, which in many ways feels post-gender.  And yet, even in the formidable wakes of feminist theory and gender studies, a stubborn sociocultural pressure remains on men to inhabit a persona—whether in the boardroom or the bedroom—that is not strictly neutral, but specifically masculine, whatever that might mean.  For artist Sean Healy, these are not matters of ivory-tower abstraction, but of poignantly personal concern.  An adopted child, he never knew his birth father; and tragically, when Healy was only ten, his adoptive father committed suicide.  Left on the cusp of adolescence with the phantoms of not one, but two absent fathers, he had to invent his own conception of what it means to be a man.  Today, at 42, he is the father of a 14-year-old son and the stepfather of an 11-year-old son, charged with imparting to his sons what was not imparted to him.  This is the rich autobiographical roux Healy as an artist brings to his current exhibition, "Extroverts," which is themed around the conundrum of staring down contemporary masculinity as he enters middle age.

Healy’s central motif and medium is the cigarette, a stand-in for archetypal Marlboro-Man machismo and a personal totem also, as Healy’s adoptive father was a heavy smoker, and he himself smoked until only a few years ago.  In three large-scale (51”x72”) drawings, the artist drew with cigarette butts dipped in water, soiling sooty lines with random chunks of burnt tobacco.  The drawings are images of ram and ibex trophy horns (harkening to that paragon of big-game-hunting swagger, Ernest Hemingway) and a laurel wreath — all symbols of heroic conquest.  Healy used 28,000 painted cigarette filters in the works "American Muscle (candy apple)" and "American Muscle (black cherry)," the titles referring to popular colors for the “muscle cars” so popular with men in the grips of midlife crisis.  Basted with resin, the myriad filters resplend with a diamantine sparkle under gallery lighting.

A grid of white cigarette filters functions as a projector screen for the digital video, Smudge.  It shows a single cigarette standing vertically, smoke billowing upward, the columnar form gradually turning into an obelisk of ash.  Given the overarching topic of middle-aged malehood, it’s not difficult to imagine the image phallically, as a sin-stick devolving with time from structural integrity to precariousness.  In its decay we see not only the waning of the great and mighty erection so integral to male mythology and self-delusion, but also an adaptable metaphor:  the withering cigarette as an existential hourglass with dwindling sands.  Life and smoking, after all, are both processes of oxidation; their pleasures and dangers are cumulative; and with both, the harder you drag, the faster you burn.

Across this body of work, Healy uses materials with the technical precision and virtuosity viewers have come to expect from him.  But given the subject matter, this virtuosity comes across not as jubilant, but as reflective and melancholy-tinged, for this is a show, ultimately, about the moment when the fruits of life, having just arrived at the prime of sweetness, begin the journey from ripeness to overripeness.