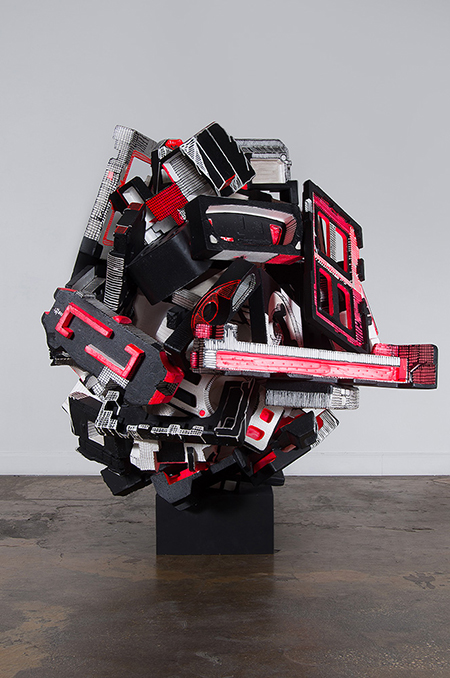 In "Redesigned, Repurposed, Re-everything" Jaime Scholnick presents a medley of works on paper and sculptures. The sculptures are made from polystyrene packaging saved by friends and family and collected for use in her artworks. The disparate packaging is sometimes left white other times covered it with lines, blackened or painted in bright colors. Scholnick molds these awkward building blocks into large sculptures that cascade off the wall, as in “Swoosh!” They sometimes evoke architectural monuments, as in "Lipstick Tower" and "Aaron's Dream." Scholnick's installation juxtaposes her sculptures with collages that are made by covering magazine pages with gridded lines obliterating the images while leaving enough of the original to retain a suggestion of their shape. Scholnick has an assemblagist's knack for turning what is discarded into beautiful and compelling artworks. The works on view in the West Gallery introduces three artists — Anna Breininger, Erica Mahinay and Lauren Satlowski — who recently moved to LA after receiving MFAs from Cranbrook Academy in 2013.