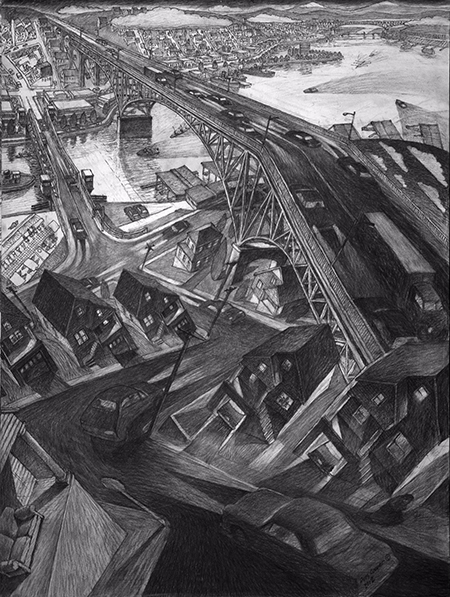 Although Douglas Cooper is not a Seattle resident (he lives in Pittsburgh), with these seven charcoal drawings the artist joins an august company of historical artists who have previously created fantasy street and architecture scenes of Seattle. Alongside Fred Anderson (1940s), Mike Lawson (1960s), Jack Gunter and John Rice (1970s and 1980s), Cooper’s extravagantly detailed vistas seem plausible and realistic, unlike their surrealistic predecessors. Historical and contemporary buildings and sites are conflated into the same scene.

The Carnegie Mellon University architecture professor has borrowed heavily from Piranesi as well as 20th-century Hollywood films noirs, and brings to mind later films that were made in Seattle, specifically Alan Rudolph’s’ “Trouble in Mind,” David Mamet’s “House of Games,” and 1960s films that depicted Seattle before its drastic downtown redevelopment such as “Cinderella Liberty” and “The Slender Thread.” Grainy black-and-white images echo throughout Cooper’s drawings. Foreground areas in “Two Routes Across” have unusually steep hills with curve-backed 1940s-era vehicles careening down streets.

Author of numerous public art murals in his home town, in Seattle Cooper executed a set of murals for the King County Courthouse entry lobby (with Gregoire Picher and Patty Clark, 2005) depicting regional history and geography, and marking the start of his interest in the city. He has also completed similar murals in New York, Frankfurt, Rome, Philadelphia and San Francisco.

Open bridges, backed-up streets and overpasses characterize “Early Morning Arrivals” while “Before and After Cranes” juxtaposes container docks with vistas of the manmade industrial area, Harbor Island. Like Pittsburgh, Seattle is a city of bridges. Cooper averages three-by-four feet per drawing, allowing for plenty of room to include distant aerial views of neighborhoods seen from far above the lofty bridges, looking down onto rooftops and over bustling factories.

Not as noisy or dirty as Pittsburgh (which once had 50 steel mills), Seattle, as delineated by Cooper’s smudgy charcoal, does seem dustier than usual. However, wind and water tend to blow away most of the smog. In describing Seattle, Cooper is still recalling Pittsburgh, in much the same way that Italo Calvino’s novel, “Invisible Cities,” turns out to be all about Marco Polo’s home town of Venice. That said, there’s an engrossing aspect to these urban fantasies.

A tiny Space Needle is seen in the distance of “Launch Morning,” looking south from Wallingford. Looking west toward the Olympic Mountains, one sees both the Interstate-5 and Aurora bridges as well as ubiquitous University of Washington rowing crews. Perhaps equally as significant as the bridges, rivers, lakes and waterways are prominent, as in “Looking Upriver,” “Then and Now,” and “University Bridge Docks.” Avoiding nostalgia despite the black-and-white vintage-photo allusion, Cooper’s vision of Seattle enriches the regions art-historical heritage, adding telling detail, distorting geography and exaggerating feats of structural engineering.