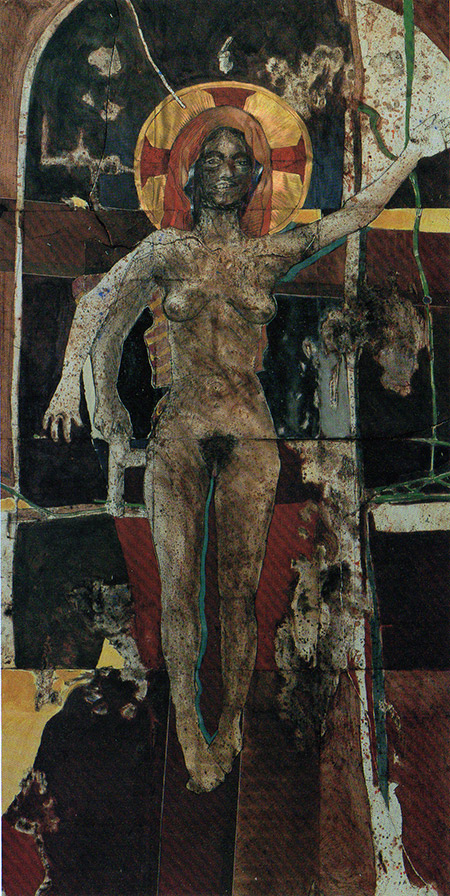 As noted in my previous column, my interest in art and spirituality led me to move curatorially from exhibiting triptychs to exhibiting crosses.  The 1991 exhibition "Cruciformed: Images of the Cross since 1980," was truly my first "dream exhibition," one that had been percolating in my head and in my files for about seven years. When I joined the staff of Cleveland Center for Contemporary Art in 1990 as Associate Director/Chief Curator, I proposed it to Founding Director Marjorie Talalay, who gave the project her blessing. Along with noted curator Nina Sundell (the daughter of New York dealers Leo Castelli and Ileana Sonnabend) and arts patron Agnes Gund, Talalay started the Center in 1968 as a commercial gallery called The New Gallery. When Sundell and Gund moved on to other endeavors, Talalay converted the institution to a non-profit, added education programming, and changed its name to Cleveland Center for Contemporary Art. The 1984 opening included a ceremony with guest of honor Joan Mondale. When I entered the picture in 1990, the Cleveland Center had recently moved into in a renovated Art Deco building, a former Sears and Roebuck adjacent to the Cleveland Playhouse. In 2012, the institution — now known as MOCA Cleveland — again relocated,this time to a new building designed by Farshid Moussavi.

Talalay was a true pioneer who really jump-started contemporary art in Cleveland. She had an eye for great art and a passion for working with living artists. She also believed in the importance of education and outreach. As I developed "Cruciformed" in my usual fashion — starting with works I knew and then going out into the field to find more — Talalay and I conceived the idea of presenting multiple shows simultaneously in the Center's different galleries that would be thematically related. The grouping, a curatorial triptych that was displayed simultaneously, consisted of "Cruciformed," which occupied the Center's largest galleries, plus works by the Los Angeles-based Japanese artist Mineko Grimmer, and finally photographs by Beat poet Allen Ginsberg. I had known Grimmer's installations from my earlier days in Los Angeles, and had included her work in a 1985 exhibition at the San Francisco Art Institute entitled "Sight and Sound." Loosely based on Shinto and Buddhist prototypes, Grimmer's contemporary shrines were architectural in form, with their main structures of bamboo and wood positioned over low water basins. Once a day, a ritual was performed as a conical mold of ice containing pebbles was suspended atop each structure. As the ice melted, pebbles fell like sand moving through an hourglass, creating random sounds that paralleled the chanting of Buddhist sutras.

The idea of exhibiting Ginsberg's photos stemmed from my having viewed an exhibition of them in a New York Gallery. When I contacted Ginsberg's assistant, he indicated that Ginsberg was interested in showing his images of Buddhist friends. From our perspective, this was particularly appealing, since the theme tied in so nicely with Grimmer's sculptures and both were perfect complements to "Cruciformed." Ginsberg's photos occupied the middle position of the three-part exhibition grouping. After walking through the sculpture court that housed the Grimmer installation, visitors would move along a corridor known as the Photography Gallery to view Ginsberg's "American Dharma." The most memorable moment from working with Allen Ginsberg, of course, was bringing him to Cleveland to give a poetry reading in the "Cruciformed" galleries. So there we were, chanting 'oms' with Ginsberg amidst all those crosses!

In selecting works for "Cruciformed", I followed my instincts and took my usual pluralistic approach. I included well-known and obvious choices such as Arnulf Rainer, Harvey Quaytman, Magdalena Abakanowicz and Gilbert and George. Alongside these I selected lesser known figures like Tom Stanton, an extraordinarily gifted yet under-recognized artist who continues to live and work in Benicia, California, and Adria Aronow, a relative unknown whose highly inventive miniature cross assemblages had been called to my attention by Margaret Poser, then working at Tony Shafrazi Gallery in New York. I also did not shy away from potentially controversial works by Andres Serrano, David Wojnarowicz or the artist duo Ridgeway Bennett, who created an AIDS awareness painting conceived as a cross-shaped shield incorporating their own semen into the painted surface and containing the word 'CUM'. As I prepared the "Cruciformed" catalogue essay, I organized the material into logical groupings, dividing the essay into sections on "Literal Crosses," "Crucifixions," "Abstract Crosses," "Emblematic Crosses," and "Crosses in the Television Age." The installation was laid out in a corresponding sequence, thereby continuing the overall installation concept of a journey that began with Grimmer and transitioned through Ginsberg.

"Cruciformed" was presented in 1991, at the height of the so-called Culture Wars, and even included Andres Serrano's "Piss Light," which was a companion to the notorious "Piss Christ" and similarly depicted a crucifix immersed within a field of urine. Yet, in spite of the potential for controversy, the exhibition took place without any negative incident, was reviewed favorably by Steven Litt in the Cleveland Plain Dealer, and received an award for the year's best art exhibition from Northern Ohio Live magazine. The real test, of course, occurred on a Monday, when the Center was closed but the staff was at work. The buzzer rang and we were greeted by a nun who had just read about the exhibition in The Plain Dealer. We welcomed her in and she took her time as she walked through the exhibition and read the labels on which I had written short explanations to contextualize the art. When she finished, she was unrattled and seemed to have enjoyed the journey.