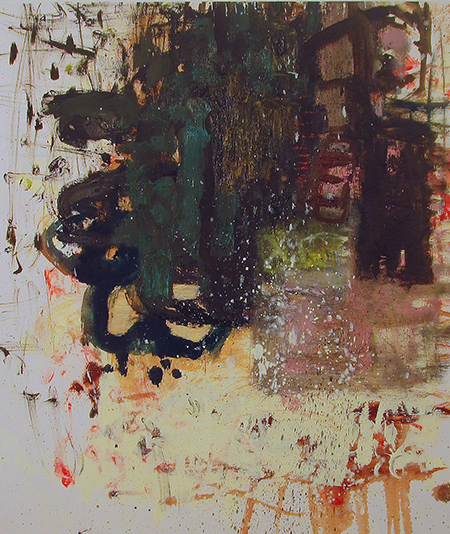 The title of Melinda Stickney-Gibson’s exhibition, “New Paintings from the Woods," refers to the place where this self-assured suite of oil paintings originated: the artist’s studio on a sylvan plot of land in the Catskill Mountains of upstate New York. Notably, the works seem to reflect the contrast between rural and urban life in their dramatic contrasts of composition, chromaticism, and surface. In "Talk To Me" dense blocks of brown and black stand out against expanses of white and eggshell, creating a duet between form and negative space. Creamy impasto also butts up against passages of paint so thinly applied or worked over, one can almost see the wood panel’s grain.

The artist is adept in paintings on paper as well, as in the impeccably serene piece entitled "Thinking It." This is Stickney-Gibson’s tenth solo show with the gallery over the last 26 years, and the long association is palpable in the symbiotic relationship one senses between her paintings and the expansive exhibition space itself, with its bank of east-facing windows and long, unbroken line of hardwoods. The Butters space is the opposite of a white cube, and Stickney-Gibson’s intuitive, organic works are the opposite of hard-edged abstraction. Rarely have subject matter and setting seemed so harmoniously matched.