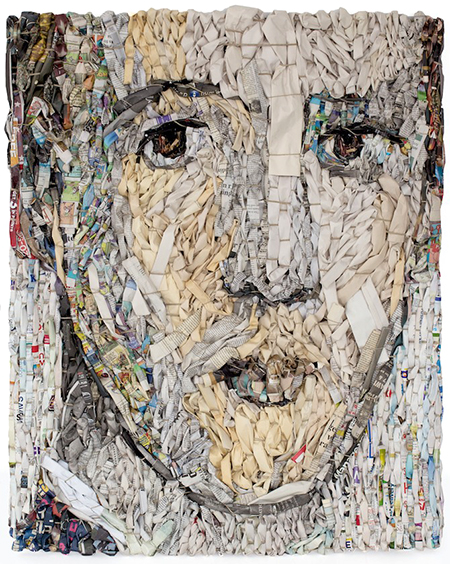 Gugger Petter’s new mixed-media works in bundled and tied newspaper successfully straddle the gap between figuration and abstraction by revisiting the past while forcefully asserting their materiality. Suggesting, if from a distance, Julian Schnabel’s early cracked-plate ‘mosaics,’ or aggressive Cubist faceting, they depict close-up views derived from 15th-century portraits of poised, confident aristocratic young men. Petter, who has long been interested in medieval and Renaissance art, and regularly travels to Italy, writes, “This creates visual tension between texture and image, and a ... blurring between representation and abstraction.” She continues: “The sitter in the Renaissance portrait was mostly depicted gazing to the side onto their own life and time. I have here reversed their glance toward us and outward, opposite to what we have done to them over the last six hundred years.”

I’m not entirely certain that these early sitters were so thoughtful and self-contained: Bronzino’s famous “Portrait of a Young Man With Book” (16th century) might be seen as the model of the patrician intellectual, in our own day perhaps a proud Google executive. But Petter also reverses the terms in reference to her previous work in "Street Scenes," with multiple subjects, spatially related, but not interacting. In any case the dialogue between image and material here is intriguing; Petter’s works call to mind Manolo Valdes’ oil-on-burlap paraphrases of Old Master Madonnas, saints and cavaliers, with the faces obscured by paint. In the eight works that comprise “Portrait of a Young Man,” we have cause to revel in glorious, complex physicality.