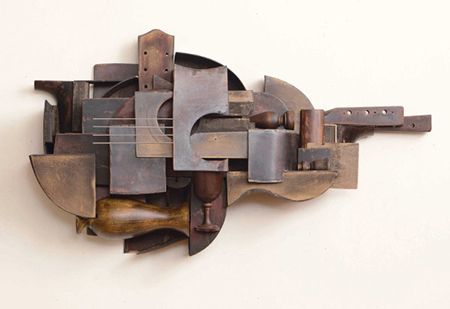 Do you have a passion for classical music or an unfulfilled dream to be a musician? If so, you’ll find Koji Takei’s “Resonance” of interest and be able to relate to his work, which is a series of sculptures composed of musical instruments — guitars, ukuleles, cellos, and horns — that he deconstructs and transforms, urging us to look at music and musical instruments from a slightly different perspective. His high-relief wall sculptures were inspired by Picasso’s collage and Braque’s papier collé technique.

They pay — or perhaps play — homage to the complexity and sophistication of classical music, a subject he studied at CalArts along with art, but later dropped when he concluded that he was (in his own words)  a "lousy musician." Therefore, the exhibition of this Japanese artist, who says that “The musical instruments I use in my art are an embodiment of my love and respect for the world of classical music,” suggests the act of picking up an old love and turning it into something new.