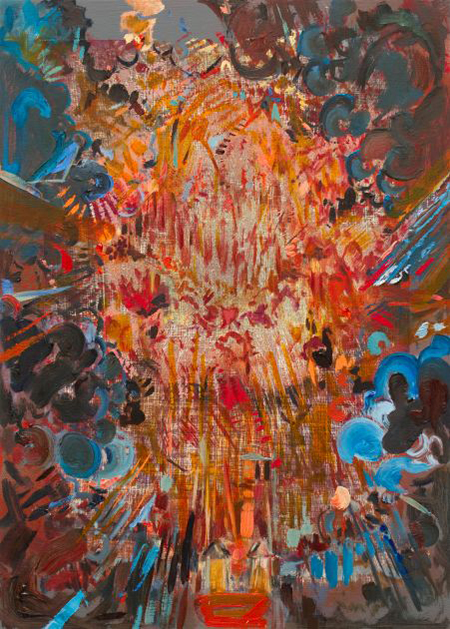 Hayley Barker has a way of painting the sun such that viewers could swear they’re seeing it for the first time. In "The Prismatic Sun" her 2012 exhibition at Hartman, she layered oil paint in thick, short jabs of impasto to depict sunrays with uncommon visual drama.  Now, in "Apparition Hill," she deploys a counterintuitive color palette and seemingly inexhaustible compositional invention to render a different, more explicitly mystical, brand of solar phenomenon.

These paintings and drawings are a response to her 2013 trip to the village of Medjugorje in southern Herzegovina.  There, atop a small mountain called Apparition Hill, pilgrims gather at 6:40 each evening, awaiting messages from the Virgin Mary, who is said to manifest as multi-colored pulsations around the sun.  Barker says she personally witnessed the phenomenon, although she remains skeptical as to whether its cause is religious or meteorological.  Regardless, in works such as “Visible" as if somehow under her skin and the searing green "She is gone. Look! The light!," her senses of line and chromaticism are at such a fever pitch, many of the paintings leave phosphenes — after-images from looking at bright objects — in the viewer’s field of vision. Perhaps this is the power of the Virgin Mary at work, or perhaps simply the power of paint, deployed by an artist whose technique matches her supernal subject matter.