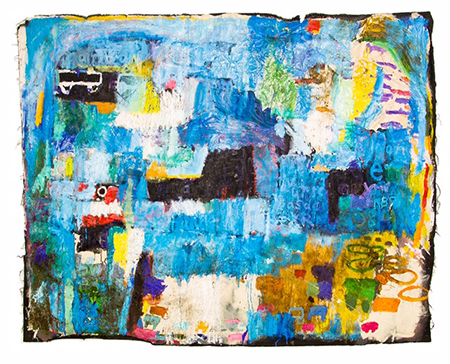 The closing of the Francine Seders Gallery after 47 years was a major thud in the dead of winter. It seemed like shoveling snow on a corpse, however, in that the gallery had long since ceased to be relevant. Stalwart and reliable, like the artists who stayed too long at the party, the gallery became a care center for careers on life support (Michael Spafford) or, worse, those stricken with the art-world form of MERS, the late-career retrospective (Robert C. Jones at Cornish College Gallery) often bestowed out of guilt or pity. Many of the stable are out on the streets for good, unable to transition, often seen wandering zombie-like with portfolios as though stepping out from an Odd Nerdrum painting — mountains in the background, please.

May in Seattle is also the season of the double rainbows, intermittent real-life meteorological phenomena occurring soon after a rain shower if the bright sun comes out right away. Double rainbows mean twice the pots of gold, but where are they? The double rainbows cannot span more than five or ten miles within the city limits, all accessible by public transportation.

More seriously, attention shifts in the spring to new sources of life and future blossoms: the art student shows! Two of the region’s best are the Cornish College of the Arts BFA show (May 9-24, www.cornish.edu/expo) and the University of Washington School of Art MFA show at the Henry Art Gallery (May 24-June 22, www.henryart.org). In good years, a few students get picked up by top-, mid-level or, more likely, entry-level local galleries. In Seattle, art dealers actually attend such events, even introducing themselves and making intelligent inquiries. Greg Kucera wears jeans — on weekends! Important proving grounds for the region’s next cultural generations, both Cornish and the UW have sent forth notable alumni and have hired distinguished faculty.

If you were to come to Seattle during the season of the double rainbows, you could see all the galleries in one afternoon. In fact, as I noticed on my vacation last year, all of Pioneer Square could fit into one corner of Bergamot Station in Santa Monica. I suggest digging deeper, checking out a few of the following galleries; these are still within the mainstream art market. With one exception they are not run by artists and are smaller, more focused on the dealer’s taste than offering the emporium of choices typical of the bigger galleries.

Still within Pioneer Square, Platform (www.platformgallery.com) has a national roster, highlighting director-owner Stephen Lyons’ flair for photographers and sculptors such as Matt Sellars and Debra Baxter. A five-minute walk away, Young Chang at Gallery IMA has evolved a quiet, Zen aesthetic that is regularly upset by gallery artists who are conceptually inclined in ways that engage craft materials, such as Alan Corkery Hahn, who makes embroidered pages of books.

North of Pioneer Square, M.I.A. Gallery, like Platform and IMA, shows art that one probably couldn’t see at other galleries, their concentration being on artists of Africa and the Anglo- or Franco-Caribbean diaspora. Owner Mariane Lenhardt, like Lyons, travels to most the national and international art fairs to display her inventory. Their exhibits connect Seattle to a bigger world and bring artists deserving of recognition and wider audiences to viewers here.

Newest and farthest away in Ballard, Leary Gallery is the brainchild of artist Randy McCoy, an ex-student of Don Woodford’s at California State University, San Bernardino (see learygallery on facebook). “It is Always Now” (to May 17) is the title of the inaugural group show. Formerly a corporate office headquarters for a wood-stain company, the single-story 1980s modular office block with an interior garden atrium and patio is the closest thing Seattle has to a Culver City-style gallery. McCoy’s shrewd pick-ups of recently “disaffiliated” artists brought several in from the sunny, windy streets and a bit closer to the end of one rainbow.

Among the pots of gold for me at Leary are Carole d’Inverno’s new pale, colored-pencil drawings of architectural and landscape plans (her best work yet); Tony Horn’s “Nine Views of Abe Lincoln” (his first show in 25 years); and best of all, “Highway” and “Blue is the New Black,” two raucous gestural oils that echo an abstract expressionism rescued from the train wreck of postmodernism. With torn, vigorous surfaces bordering on the topographic, sublime flatness is sacrificed to a bustling dynamic of shapes, images and word fragments. Patrice Tullai, the artist, lives alone in a cabin near a flowing river, where she also painted “The Sky is Falling.” Finding her work at Leary, the season of the double rainbows has not let me down. With such visual riches in the spring salons, the rainy season can now resume.