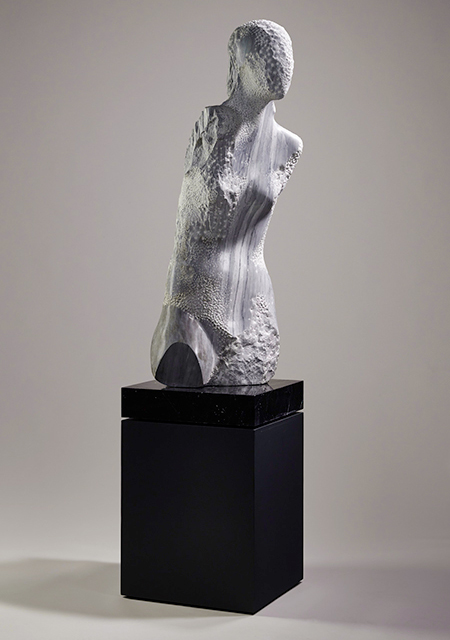 The art of the Bay Area Figurative School looks better with each passing year. Its conflation of representation and abstraction, which once shocked the art world into high aesthetic dudgeon, now looks like the gutsy American version of Expressionism that it was. It also looks, with its heroic individualism, tinged by tragic Existentialism, like the last effusion of the European humanist tradition. The sculptor Manuel Neri, now 84, has explored the “partial figure,” to use art historian Albert Elsen’s term for certain works by Rodin, for decades; with his virtuoso technique, psychological insight, and his sensuality and power, Neri might be considered a modern Rodin.

Seven figurative sculptures from Neri’s studio in Carrara, Italy comprise the current show. These fragmentary marble figures invoke the classical, Renaissance and neoclassical past forthrightly, celebrating both the beauty of the idealized human form, and, with their undisguised rough-cut chisel marks, the rough, artisanal creative process of the studio. Jack Cowart, former director of the Corcoran Gallery: “Neri adores stone for its tough permanence, vast geological history, luscious colors, and intricate veining. But he fights against the stone’s surface, nonetheless, by chiseling, hammering, grinding, polishing, and, occasionally painting it, to deny its nature.” Beautifully installed atop pedestals that are the same height as the work stands used by Neri, and sensitively lit, these torsos and busts, with accents of bright color that set off the seductive naked stone surfaces, are meditations on the eternal human condition: transient, but, through artifice, eternal.

Four standing figures, fragmentary or incomplete, predominate. “Mujer Pagana No. 8” (Pagan or Heathen Woman), semi-emerged from its stone matrix, blends so thoroughly with the building’s white-and-gray marble lobby that I initially walked right past it. “Bardilia No. 3” is a Venuslike standing female figure of elongated Mannerist proportions, her features obscured by hammered dimples. “Mi Piedra” (My Stone), is a glossy, Canova-esque female torso of slim contemporary proportions. And “Cipolina,” a columnar female figure bereft of arms and head, readily invokes archaic Greek models, with the vertical veining of the stone suggesting wet draperies. Rounding out the show are two recumbent female torsos, “Pisano Torso” and “Odalisque I,” the latter featuring Cubist planes in the Archipenko/Duchamp-Villon style, and a portrait bust. The Japanese figures of “Maki No. 1” is withdrawn into herself. Her eyes are closed like a Symbolist Buddha, and her face is painted a brilliant and spiritual yellow.