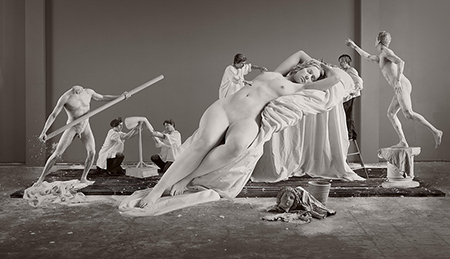 Passengers
where are you going?
from here to there
do you ever get there?
I don’t know
why
not?
i’m only a passenger
--
just like
you

- from an Egyptian tomb

In a series of drawings, photographs and decoupages, Eleanor Antin conjures personages from past works in a narrative that revives their timeless relevance to the present. Incursions into modes of representation, such as tableaux drawn from traditional history painting, are made through theatrical installations, postcards, and delicate pastels. Antin re-lives, revives and questions the interpretation of a historical narrative that we thought we knew. By confronting us  with King Louis XVI, Helen of Troy and the death of the Maidens in the Dance of Death, we not only see them anew, we enter into their space.

An early work, “100 Boots” (1971-73) is a metaphorical and visual vehicle that here serves as an invitation for us to “’put them on” and join fellow passengers. After all, these fifty or so  photographs of 50 pairs of rubber boots seen in different spaces and facing different ways have “traveled” as postcards on endless journeys.

The monumental work “Constructing Helen” (from “Helen’s Odyssey”) (2007) is drawn from a performance project that Antin filmed with live actors in the California desert. The work refers not only to the Trojan War  as an event inscribed in history, and its Homeric presence, it is also an homage to the dramatic compositions and salon style of the 19th century. We are witnessing the destruction of Troy, with the center of action being the abduction of the beautiful and passive Helen. Her body in repose overpowers the space, the figure of a larger than life (the irony is evident) woman draped on a cloth-covered board, forming a broad diagonal line that dominates the composition. But the present dominates the scene. There are stage hands and prop assistants at work setting up the scene and intermingled against the beheaded statue of a warrior, his disembodied head lying on the floor. Paint cans and canvas used to set up the scene lie scattered around. Antin casts us as witnesses not only of Helen’s Odyssey, but to the exaggerated representation of a familiar narrative and the formal means of its telling.

In the pastel drawing  “Death of the Maidens” (from the “Dance of Death”) (1974-75) a female body lies face down. Her pink dress is bundled around her as a lively and energetic skeletal Death rushes toward her, lance in hand, kicking her aside with its bony foot. The dramatic contrast between the two is startling. Death’s ruthlessly energetic force, his triumphant smile overpowers the Maiden. Antin enlivens a medieval concept present in the constant awareness of the threat of violence against women.

King Louis XVI’’s presence and historical power is embodied in the cut-outs of lifeless objects: his crown, his robes, a weapon, his dog, his horse and his head. The historical moment is, of course, the aftermath of the French Revolution. Is this all that remains of the grandeur and glory? Cut-outs to dress a paper doll?

Time is a human concept codified in our calendars, watches and in our consciousness of beginnings and ends. Antin pokes into that structure, spelling out the substance of the moment and questioning it futility. “100 Boots Facing the Sea” (1974-75) and “Going Home” (from “Roman Allegories”) (2004) confront the contradictions that history defies. In the first, the orderly boots standing in previous images in a straight line are now scattered throughout a beach landscape.  They lie half-buried in the sand, awaiting the inevitable rising tide. There are no orderly rows in what lies beyond. No unity, no collective mass. Where will they go from here? Antin awakens our response. She demands it from within each of us. We feel that we have walked in these boots, now scattered on the sand. Where exactly have they brought us?

In “Going Home,” personages dressed in Roman tunics, but carrying modern umbrellas, are also on a beach. They face the ocean and its oncoming tide. They wait. They like us, are passengers. And as the voice that echoes through a timeless space from an Egyptian tomb reminds us, we do not know if we will arrive.