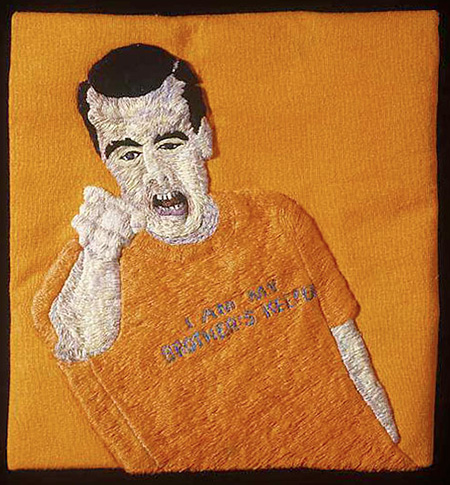 Like a mini retrospective, “...waiting for nothin’” presents more than a decade's worth of works from textile artist Darrel Morris, from his early, intensely personal narratives to more recent pieces with subject matter that is broader, but just as emotive. Often, Morris draws from his Appalachian upbringing, one in which conservativism, abuse, and power struggles feature prominently. This isn’t to say that Morris’ work functions merely as a diary; he balances the work’s unhappiness with absurdity and wit, and his depiction of feeling like a black sheep, of feeling as though one will never “fit in,” is universal.

Morris’ mastery of textiles, also sourced from his childhood, not only speaks to the gender politics underlying his practice, but is also an ideal vehicle for his subject matter. In “Good Towels,” the said objects are recreated in rough, knobby appliqué and embroidery. The sagging fabric used in “Defeat” mimics the slouch of the figure’s ill-fitting suit as well as the despondent drooping of the man’s shoulders. And the blank canvas ground of “waiting for nothin’,” the show’s namesake work, puckers as a result of the stitching, seemingly swallowing up the forlorn figure into its beige void.