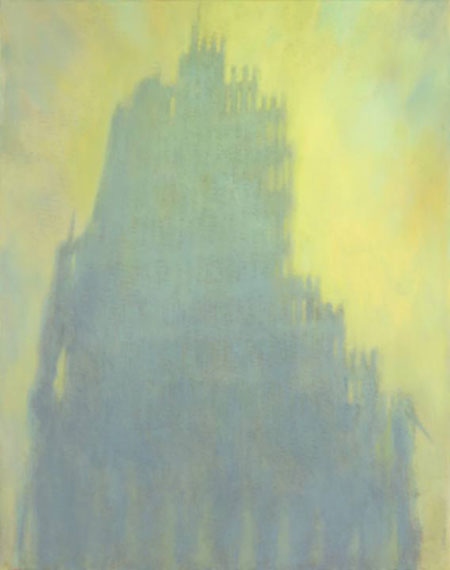 Two widely admired academic realists, Mitchell Albala and John McCormick, show a selection of new work alongside one another. One continues to plunge into a bucolic, completely cut-off landscape fantasy world; the other is also obsessed with the past, but has grafted on the horrors of war. Another way of putting it: McCormick channels California impressionism in all its glory; Albala has become a contemporary artist.

This ingenious juxtaposition of these two sheds light on how representational artists can respond to our troubled world — or blissfully ignore and escape from it. With the advance of photojournalism, the recording tasks of painters, as in World War I and II, became increasingly irrelevant and superfluous. However, Albala, who teaches at two private realist art schools in the Seattle area, has focused on transforming iconic sites of colossal destruction into beautiful evocations of sunlight, color, wind and air. The paintings’ appeal has a lot to do with their potential controversy.

September 11, 2001 is captured in “Apparition,” with its ghostly image of the World Trade Center. It is accompanied by an exquisite study. Similarly, the conning tower at Auschwitz in Poland is paired with a study. Icy blue, the structure is fittingly imposing rather than inviting. Averaging two by three feet, the completed paintings emit quiet outrage, pining for the attention of the alert viewer.

“Study: Conflagration” and “Study, Infamy” are giant fire sites, the latter’s blue-green sea and sky revealing Pearl Harbor on its “day of infamy.” The larger “Infamy” (18 x 24”) is less brushy, more clearly the explosion of one ship. Remaining with World War II, “Bakushin-chi” is the burnt-out ruin of a civic building in Hiroshima (the one that was preserved as a reminder). “Pika Don” and “Fat Man” refer to the Nagasaki and Hiroshima bombs and their effect seen from the air. “Terror” emulates a Turner landscape and sunset over London Bridge that is, upon closer inspection, a scene of the Blitz, bombings by German planes. “Conflagration, Atlantic,” equally abstract, suggests the battles of U-boats and allied battleships. Albala is painting reminders of global conflict, yet manages to do so without a single human figure. He has turned realist powers of observation into imaginary scenes of real events. He has transcended painterly realism and suggests its possible fate in the present century.

McCormick is more widely known and has also exhibited in group shows in Birmingham, England; Moscow; New York; and Chicago. Western art or cowboy art is a highly commercial component of the art world; McCormick does not disappoint, providing a northern California arcadia of horses, riders, cypress trees, sunsets and glistening fields. McCormick teaches at a commercial art school in the Bay Area and his technique — drawing, shading, brushwork, color — is unparalleled, all chronicled in a 2001 book, “John McCormick Landscapes” by Seattle art critic Ron Glowen. Over a decade later, McCormick’s approach is one of occluded or shadowed figures with late-afternoon sun or twilight. In this, he resembles 19th-century American artists Ralph Blakelock and George Inness, known for their long shadows on quiet forest scenes.

“Unveiled Moment” is pure California impressionism: sunny sky, background ocean, dark green trees and yellowed field. “Coastal Town,” “Lost Hills,” and “Windy Spaces” follow through on the same ideas, each with its own special weather moment, from glowing clouds to darkened foregrounds. McCormick’s skill and facility keep the viewer entranced while searching in vain for any deeper content, á là Albala, or hints of ecological disrepair, as in Northwest landscape artists Michael Brophy and Nathan DiPietro.

The rewards are substantial in any event. Two big horse paintings, “Dark Horse” (60 x 60”) and “North Coast Spring” (30 x 30”) are as good as anything 19th-century German artist Adolf Schreyer or British horse painter George Stubbs ever did. The former painting observes a horse gazing at what could be tall buildings in the distance (a rare comment on the present?), while the latter points a handsome white steed back toward the barn.

Less interesting are the three figurative works, “Visitation,” “Magi” and “Magi 2.” Three riders are seated on horseback, wading or crossing a body of water. With white-painted water effects and sunlight pouring through trees, it is unclear why the riders are there, possibly fox hunting or playing water polo. When realist figures are without identity or psychological insight, they become props and seem to get in the way of the artist’s otherwise total control over landscape painting. More effective, the stormy clouds of “Blue Hour” speak across the room to Albala’s riff on historical and political ruptures.