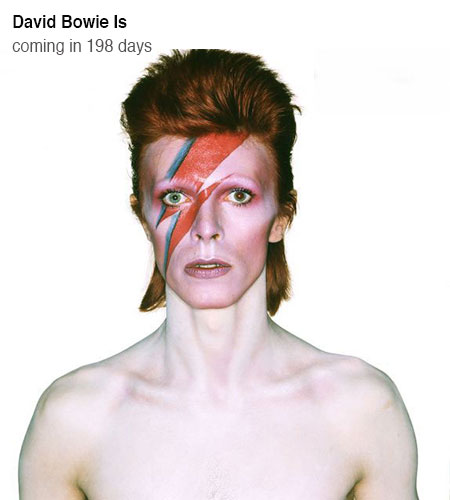 “David Bowie Is” arrives at the Museum of Contemporary Art in Chicago in, as of this writing, 201 days. I’m not counting the days, but the MCA is, and they are running a daily countdown just in case you want to schedule your life around this and remembering September 23 is too much for you. I bet you know where I’m going with this: the overwhelming desire some museums experience to try suddenly and atypically to broaden their constituency, reach out to people who don’t go to art museums, program something that’s not that challenging contemporary art that only a relative few are interested in, and see how many warm bodies they can jam into their usually too empty galleries. You know, “The Art of the Motorcycle” at the Guggenheim Museum in New York in 1998 (still their highest attended exhibition), “Jacqueline Kennedy: The White House Years” at the Metropolitan Museum of Art in 2001 (featuring 70 original outfits), etc. Anything to reach a cross-over audience and fill their coffers for a bit.

You have to hand it to the MCA, though, they’re all in with Bowie, and their press releases are almost giddy with anticipation — “more than 60 stage costumes,” “never before seen storyboards, handwritten set lists and lyrics,” featuring his “chameleonic character transformations throughout the years [that] are central to his contribution to contemporary culture and highly relevant to contemporary artists such as Cindy Sherman, Wu Tsang, Janelle Monae, and Lady Gaga.” Yes, they’re going gaga indeed: Chicago is the only U.S. venue for the exhibition, organized by the Victoria and Albert Museum in London with other stops in Berlin, Toronto, Paris, and Sao Paolo and more expected.  Of course, you have to dig a little to discover that the one person who seems singularly unconcerned with the exhibition is Ziggy Stardust himself — the exhibition was organized and mounted without Bowie’s participation (though he did allow access to some of his papers and materials), he didn’t attend its opening (there’s a rumor that he poked his head in unannounced before the exhibition closed in London), and while staff at the MCA, drooling like star struck correspondents to Tiger Beat, keep saying they hope to get Bowie to show up in Chicago, I would bet the farm on this — he ain’t coming.

Not that it matters too much. He’s a celebrity, he’s famous, his name is instantly known to millions upon millions of people who have never heard of William Kentridge or Sarah Sze, and he does exhibit some vestigial relationship with art, if we don’t put too fine a point on it. He certainly is a major figure in the history of modern and contemporary music, and his work in film was more significant than many might recall (I enjoyed his characterization of Warhol in Julian Schnabel’s “Basquiat”). But let’s face it — he’s only obliquely a player or participant in the history of modern and contemporary art. ‘MCA’ stands for the museum of contemporary art, not the museum of contemporary culture. When they pull all the stops out for an exhibition that better belongs in the Rock and Roll Hall of Fame and Museum, they permit us to question their curatorial decision making. This is pandering.

I was once a Young American, and somewhere in my basement is the LP of “Aladdin Sane,” and from time to time I watch his version of “Wake Up” with Arcade Fire on YouTube. But for what were undoubtedly good reasons David Bowie chose music over the visual arts a long time ago. There are hundreds of artists who would benefit the public discourse on art from the spotlight the MCA has instead decided to shine on someone who doesn’t need it, doesn’t acknowledge it, and doesn’t appear to even want it. Does the MCA really require, as critic Dennis Adrian once put it, “Tout Skokie” in the museum so badly that this is the programming they see as central to their mission?

I went to the MCA today, another frigid March Tuesday in Chicago. There’s a terrific exhibition of the work of William J. O’Brien there, and the last few days of “Art of the Shovel,” the latter about as far from “The Man Who Sold the World” as one can get. As is usually the case at the MCA, the rooms there were at that tortuously awkward point between being empty and being peopled by visitors, who, however few, were very much engrossed by what they saw there. The MCA draws between 200,000 and 250,000 visitors most years, about 1/6 the attendance of the Art Institute of Chicago. At the Victoria & Albert Museum “David Bowie Is” drew 312,000 people to its halls for this single show. I understand how, in one exhibition — hmm, not quite a blockbuster, how about ‘starbluster’? — a place like the MCA can effectively double its usual annual attendance. Budgets are tight all over, and I don’t blame people who work at the MCA going to sleep with visions of sales of Bowie/MCA t-shirts dancing in their heads. But “Wild Is The Wind;” there is much to be gained here, but also something essential lost; that for an art museum with pretensions to national stature this finally might be a party not worth hosting.