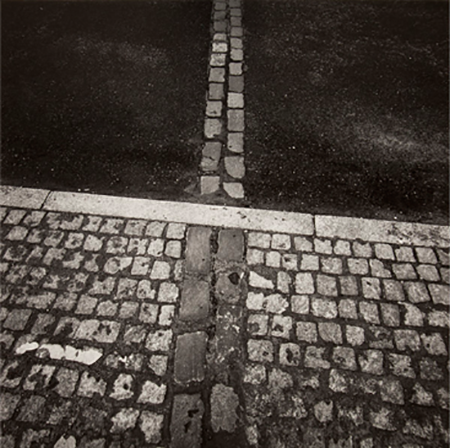 For two decades, Alan Cohen has been photographing the physical, geographical and ideological sites and boundaries that divide us. In this exhibition, the US-Canada and US-Mexico borders, the Israel-West Bank barrier, and the Prime Meridian are among the subjects of Cohen’s photos — places that carry a range of historical, political and emotional weight. Some immediately conjure up images of tumultuous pasts, while some embody contemporary violence and turmoil. Still others, like the painted over graffiti wall in “Lines of Authority (Walls, Oaxaca, Mexico),” bear evidence of a different kind of blockade: that of suppression.

As much as these photographs are about difference and separation, and the cultural significance of specific memories and events, Cohen’s artistic choices in capturing this subject matter produce yet another layer of meaning. Each black and white photo depicts a tight crop of a wall or the ground; without reading the titles, the bricks, concrete, barbed wire and chain link fences would appear anonymous, as there are no landscapes or even color palettes to provide much geographical or semiotic context. By focusing on the basic and formal properties of these sites instead of more blatant signifiers, Cohen’s photographs highlight commonality, presenting a sense of unity amongst these borders that are intended to keep people apart.