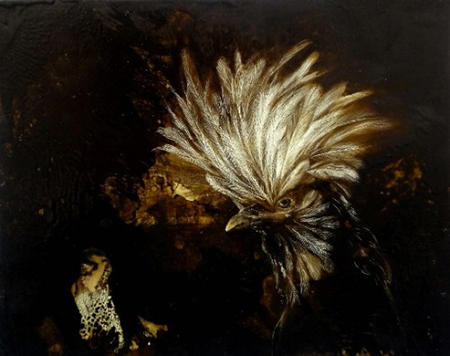 We live in a digital word. The magic box of the computer can create illusions that range from volcanoes erupting over Roman resorts to futuristic wars with evil aliens. The wonders do not cease.

And yet I find myself drawn, again and again, to images that aren't generated on the flickering screen. Images that are, instead, painted by the hand of an artist.

One reason may have to do with pacing. Screen images call for rapid, almost automatic ingestion. We take them in at a dizzying speed, which we have to do, because the screen is about to change to the next commercial seduction. But paintings — good ones at least — slow us down. They demand considered response. They insist on our time, our thoughts, our psychic engagement.

I went to an exhibition with a non-art friend a while ago and watched her race through the gallery, barely acknowledging the art on the walls. I was offended at first but then I realized she just didn't get it. Or perhaps she didn't have it. Whatever. She was in screen mode.

Can you imagine racing through an exhibition of the work of, say, Jordi Alcaraz? His play of paint and graphite and glass and shadow demands significant viewing time. The gift is only given to those who invest the requisite attention.

Another reason I am drawn to painted images may be the materiality of medium. Digital images are made at a distance, from one keyboard to another to another, without physical existence of any sort. I remember being shocked when I first realized that newspaper photographs no longer had tangible form — that they went from camera to published page without first being printed. Now the non-physicality of most of our visual field is taken for granted. But paintings are material (and also, perhaps, materiel?). They take stuff from the planet (pigment), suspend it in water, oil or egg and transmute it into imagery. That's alchemy. The very nature of that transformation is enchanting.

Beyond the materiality is the sensuality of painting. Yes, yes, I know some people go to the digital world for sex. But I'm talking about something different. I'm talking about the desire to run your hands across a painting and feel the surface, feel the trace of the brush stroke, sense the echoes of the way the artist moved her hand over the canvas. Although I have no desire to caress the computer, I often want to touch paintings. Although I have never felt moved to lick the television, I always want to taste the shimmering frosting of Claude Monet's delicious Rouen Cathedral facades.

As early as 1936, Walter Benjamin famously wrote about the aura of direct experience with art, contrasting that ritually-infused aura with the mass consumption of mechanically reproduced imagery. I suppose I am adding a footnote to his insightful assertions, but the point bears being made again and again. Paintings communicate to us in a way that digital images — for all their magic — cannot.

I mentioned to artist James Griffith, who paints with tar [Griffith's current exhibition at El Camino College Art Gallery runs through April 3rd - Ed.] that I was considering writing on this topic. He messaged me something beautiful about it: "Everything I do with tar/paint is about knowing/experiencing with my body and its primal unity with the physical chemical matrix that is the actual stuff of life. It is a connection to the primordial and the possibility of a future. I just made my first video and I am very excited about doing another, but I think of it as a way of seeing that will improve my more physical work with tar. I also feel that there is a pervasive tendency for people to give up their physical contact with the world (not gardening, not walking, not touching) that disorients their senses of compassion and ecology."