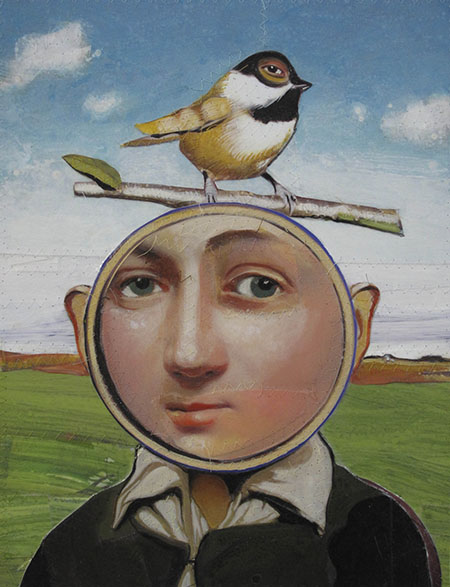 Michael Madzo, "Those Who Were Sacred," 2014, mixed media

There is an air of nostalgic calm to Michael Madzo’s surrealist collage paintings that is both comforting and odd. Comforting because his sharply cut and then sewn together images on paper allude to mysterious, yet peaceful and half familiar places. Odd because the nostalgia they evoke springs from things we have never seen and times we know more from old paintings than from our own world.

In the contemporary world we are accustomed to the unconventional and the irrational. Those were once the hallmarks of surrealism’s exploration of the unconscious. Now however fantastic images erupt routinely from almost every surface and screen we see. Our buildings wear enormous images like tattooed skins, we eat foods in alien colors, melt glaciers to drink and “like” things and people without really knowing them. We are offered disjunctive juxtapositions so routinely that reality’s slippage is constant and commonplace. One recent super bowl commercial had American music icon Bob Dylan asking “Is anything more American than America?” and answering by walking through pool halls and flag draped small town neighborhoods to sell cars for Italian owned Chrysler but urging us to buy our beer from Germany. As irrational as that mix sounds, it’s actually a pretty accurate representation of the corporate “American America” that is our new reality.

Perhaps that’s why Madzo’s surrealist images strike me as nostalgic. The unreality his images offer is untouched by the present world’s clashing mashup of disparate things. While clearly dreamlike and strange, his works evoke a sense past ages when reality appeared far less conflated. By working from reproductions of cut-up old paintings Madzo creates a mental template lifted from history. His visions offer a dream-logic world filled with carriage wheels, quill pens, magnifying lenses and turbans, all infused with the slower pulse and more metaphoric connections we once attributed to the natural world.

Madzo has for years used painted washes over the surface of his works to merge the excised fragments he gleans and then machine stitches together. The paint previously acted like a veil, obscuring edges and selectively revealing details in the background or on faces that he chooses to shroud, reshape or highlight. For this newest work, however, he has begun painting on the selected parts prior to assembly. As the paint becomes a stronger, more assertive presence, the images refer even more decisively to the history of painting.

Often the characters in his works appear to be period specific. The small fragmented figure in a skull cap shown gazing forward intensely while flying astride a bright speckled bird with a human eye in “Above Reproach” would be at home in the work of Pieter Bruegel or Johannes Vermeer. “That Promise Lingered” shows an elegantly elongated figure whose floating locks, loose colorful clothing and relaxed gesture call to mind Sandro Botticelli.

The denizens in Madzo’s paintings are a pensive lot. Whether they are looking off into a distance we cannot see or returning the gaze of the viewer, they display a haunting internal quietude that suggests deep thought or recollection. That’s remarkable given the cut and paste way their faces are assembled and oversewn so that they might be seen as bearing the scars of horrific accidents or experimental surgeries.  Instead their faces exude a thoughtful peace. I think it’s the eyes.

Eyes in Madzo’s painting are always gentle, filled with intelligence and pathos. And they are always human, even when the face they are mounted to is not. It is the small insertion of a soulful human eye on the little yellow chickadee perched above the magnified, patchwork face of a quiet boy in “Those Who Were Sacred” that gives the bird its wise and knowing visage. Similarly, each of the five small colorful birds whose pear shaped bodies line the cloth draped ledge of the mysterious “Three Pairs And A Scribe” seem, because their eyes are human, to be sharing with us their unperturbed acceptance of the brooding polarities of the landscape and the passive scribe working in the clay jar above them.

In the visually sliced and diced world that Madzo’s intuitive method of construction generates, the penetrating yet calm gaze on all faces comes as a relief and a conundrum. Clearly taken from other contexts that we cannot know, they bring with them only a silent reminder that the eye is always observing and the mind is always working, no matter what the situation.