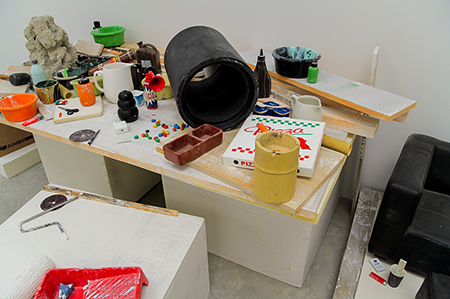 Peter Fischli and David Weiss are Swiss artists best know for their 1987 video "The Way Things Go" that documents a Rube Goldberg-esque chain reaction. While this 27 minute video has been shown worldwide and has a life of its own, it is not - surprise! - the artists' only work. Fischli and Weiss have created works in numerous media ranging from tables of photographs, to artist's books, to sculptures and installations.

Although Weiss passed away in 2012, their collaborative works continue to be exhibited. Numerous pieces from an ongoing series begun in 1982 are on view here. These polyurethane objects are handcrafted replicas of everyday objects. Installed in a scattershot manner in the gallery, the objects are placed on pedestals and palettes created as part of the exhibit to house objects both large and small. These include tools and materials one would expect to find in an artist's studio-- as well as pizza boxes, orange peels, cigarettes and lighters. Fischli and Weiss recreate the everyday determined to "elevate the mundane to art."