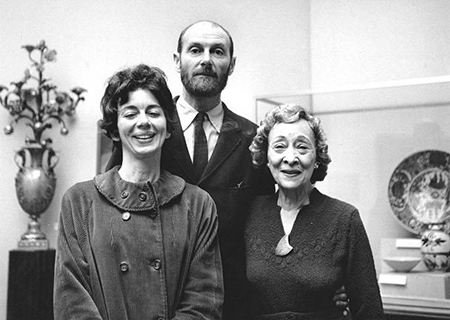 “Zoe Dusanne: An Art Dealer Who Made a Difference” by Jo Ann Ridley (Fithian Press, Santa Barbara, California, 156 pages, $15.95) is a biography of an important contributor to the history of Pacific Northwest art that adds to an area of American art history that is still sadly underserved. A second recently published volume of a similarly important local figure whose legacy has also slipped our collective memory, “Margaret Callahan: Mother of Northwest Art,” will be the subject of a separate column.

The vanity press publishers of both volumes illustrate the advantages and pitfalls of self-publication. Coincidentally, both Ridley and Brian Tobey Callahan, Margaret’s son, died last year. Ridley’s book was also shepherded through publication by her son.

Although Dusanne (1884-1972) was a native and lived in Seattle throughout the 1940s, 1950s and 1960s, she lived in New York between 1928 and 1942, a period that is covered thoroughly and was crucial to Dusanne’s return to Seattle, where she became the city’s first art dealer to show Northwest, New York and international (Japanese and European) art.

As discussed at a recent University of Washington—Tacoma symposium organized by Gary and Deborah Boone of B2 Gallery, the central question of Dusanne’s life was how she turned from a family that cofounded the Seattle chapter of NAACP into a bohemian dilettante who passed as a white woman in Manhattan and in Seattle after she returned. This is touched upon by Ridley, but not really explored in depth. We never receive an answer to the question, why?

Instead, Ridley pieces together the available archival material on Dusanne to confirm or deny various rumors and shibboleths about her. For example, Henri Dusanne, her third husband, may not have existed at all other than as a name. And no, contrary to scurrilous rumors that were circulated by her publicist frenemy Betty Bowen and “Seattle Times” art critic Tom Robbins, she was not the mistress of any prominent French artists (she did not travel to Europe until 1953 when she was 69).

Her life in New York is somewhat murky, too. Ridley offers extraordinary evidence of a cultivated and attractive young African-American woman who was familiar with an entire raft of artists that spanned uptown and downtown. But began her career in Greenwich Village, where she was befriended by Marie Yuster, aka Romany Marie, a restaurateur who introduced her to everyone, including Mark Tobey. It could be that, like Sheilah Graham, F. Scott Fitzgerald’s last lover, Zoe Dusanne became “a college of one” and learned about art and culture by assiduously looking, reading, learning from and listening to such luminaries as Piet Mondrian, Stuart Davis and Alexander Calder.

Resettling back in Seattle in 1942, she returned to New York frequently and began thinking about helping her friends there by selling their art in Seattle. She eventually did so, operating galleries from 1950 until 1964, when the last of her three gallery locations closed. Henri Michaux, Sam Francis, Paul Jenkins and Yayoi Kusama had their first US shows with her. Despite such advances and her extensive efforts to promote Tobey abroad, the gallery began to falter when Tobey switched to Otto Seligman, an Austrian refugee (and brother-in-law of composer Arnold Schoenberg) with whom he had fallen in love while studying in his French class at the YMCA. The gallery held on for another few years, but closed in 1964. She died in 1972 at age 87. Largely forgotten now, Ridley’s book goes a long way to restoring Dusanne’s deserved central place.