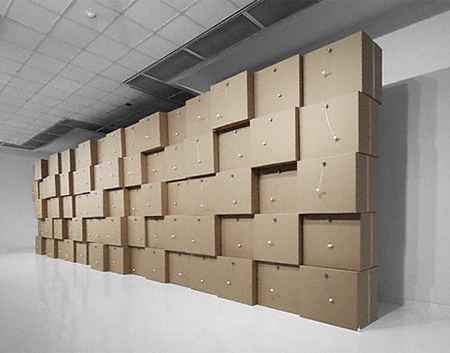 The sound of one of  Zimoun’s installations is the multitude of many identical noises - often, the buzz, beating, or swiveling of hundreds of the same small motors run simultaneously. The sound can be likened to pattering raindrops, clicking typewriters or the vibration of a hundred air conditioning units in a condo community. It is a musical sum of an everyday happening. Although Zimoun might refer to his installations as “static sound architectures and spaces” and tell you that “What you hear is what you get,” the acoustic experience of entering “Wall of Sound” might be less like entering a building and more like entering a living bee hive. Such is the collective energy generated by the movement of so many simple machines. Like the cloned sisters in a hive each making an individual buzz, each dancing a unique waggle and adding in her small way to the hum of the larger swarm mind, the 400+ cardboard boxes stacked throughout the gallery space, each with a small dc motor swinging a cotton ball that drums against its surface, creates the insistent sensation of entering something organic, albeit mechanized.

The Swiss-born artist is fond of repetition and has a history of reiterating large grids of simple objects. Like a favorite quilt square, he has made a number of installations that involve cardboard boxes. In 2010 he created a spacious room with 111 large open boxes stacked from floor to ceiling. The boxes created a grid that was stark and clean; and each box housed a single frenetic jumping wire that was turned by a hidden motor. This immersive installation (all the installations are named simply by the listing of materials used) oscillated viewers between experiencing one and all; between non-living and living; and between control and spontaneity. The boxes function as cells and the wires evoke highly magnified cilia. Strangely, there is no distance in the magnification, because as each wire hits its own cardboard surface with every twist and turn, a unified orchestra of musical pattering results. The making of sound is observable and transparent, but somehow the comprehension of the total is elusive. Each box or cell is assembled from the same components – mass-manufactured by a team of assistants or volunteers - but each wire wriggles according to the minute differences in length, density, and human error. Does that mean that a sufficient quantity of mechanized movement can approach the quality of life?

An earlier work such as "25 woodworms, wood microphone, sound system" (2009) is the flat-out amplified noise of live woodworms chewing a hunk of rotting wood, the sound not of technology but of nature. Recent work continues to make extensive use of cardboard and other basic industrial materials and massive repetition, but explores even more deeply aleatoric, or chance-controlled sound. The level of deliberate control and rigor is counter-balanced by the inevitable (de)generation of the overall sound, although Zimoun is clear that he is “not using chance to discover unexpected results, but to elevate the works to a higher level of vitality.” “Wall of Sound” appears to be less structured than past works, as there is no room or substantive wall constructed; instead, uneven stacks of percussive boxes sprawl apparently haphazardly throughout the gallery space like a maze with no perceptible grid. Indeed, the reference to a “wall of sound” is pointedly directed at Phil Spector's famous early 60’s pop song production technique of layering multiple guitarists playing the same parts to create a density in the background music. Here, the gallery space itself becomes the instrument, and as the viewer moves through the space, “the wall” of sound will change and shift. As John Cage famously said, “music ... is not an attempt to bring order out of chaos ... but simply a way of waking up to the very life we’re living.”