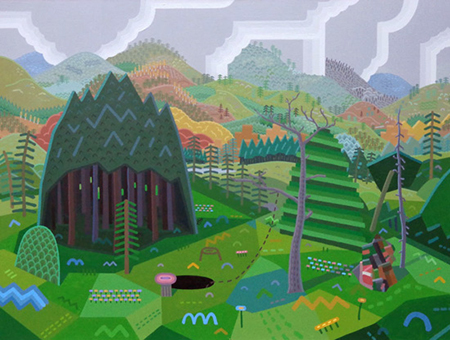 For his first solo gallery exhibit here since his 2005 Seattle debut, Cable Griffith has made a big step forward, confirming his early promise and suggesting the evolution of a major talent. Despite claiming the influence of video game imagery, the dozen unframed works on paper (ask to see these), four small paintings, and seven large acrylics on canvas elicit visions of a completely self-contained natural world.

Abbreviated and abstracted, Griffith’s images of nature also suggest the international traffic sign code, ancient petroglyphs and hieroglyphs, and scribbled shorthand by a very busy secretary. Posing rather than proving, the various landscape settings couldn’t possibly exist, other than as filled-in schematics for a world that, like ours, contains remnants of unexplained catastrophes, mysterious sink-holes, architectural ruins and toxic weather systems that illuminate nighttime skies or darken a daylight-drenched sylvan setting. Other Northwest painters exploring such fraught natural environments include the late J. Steensma and Wendell Brazeau, as well as Griffith's contemporaries Andrea Heimer, Nathan DiPietro and David C. Kane. Unlike Griffith, these artists all employ human and animal figures. It’s too late for that in Griffith’s artistic biosphere; they’re either extinct or observing from distant, protected sites.

As viewers, we can pretend we are the survivors and thus revel in the art of this Boston University (BFA, 1997) and University of Washington School of Art (MFA, 2002)-educated artist who now teaches at Cornish College of the Arts. An academic style, in a sense, Griffith’s carefully calibrated compositions, restricted palette and stripped-down imagery trace a modernist trajectory dating from as far back as Joan Miro or Paul Klee.

Like those giant avatars, Griffith’s sweetly attractive colors (blue, green, pink, orange) and cheery enigmatic character can occasionally fall flat. However, in the largest, most ambitious pictures, such as “World Two Overview” and “Gallatin Passage,” Griffith travels beyond his vaunted high and low sources, accentuating the necessity of making every square inch of the painting count. Close color values are complemented by autumn leaf colors in the latter work with its cartoonish stumps and clouds.

The former work seems elegiac and prophetic at once. Unretrieved clear-cut tree stumps sit beside strangely sprouted pyramids surrounding a tall purple tower and a nearby nuclear power plant. The humor is that such a dire aftermath is rendered so cozy and inviting. The central campfire takes on a ceremonial dimension, as if the sole relic of a leisure area where people — now absent — could once gather. The domed topiary hedges and shrubs imply human presence but, as if in a darkened Chernobyl, people are absent and one enters at one’s peril. Stepping inside a Griffith, the tug to involvement and inspection is undeniable. Nature is now a monitored, supervised environment with loudspeakers, radar stands, and surveillance cameras.

“The Sky is the Limit: Authorities Here Are Alert,” “This is the Place: Prepare to Defend Yourself,” “Tree Sprites” and “Desert” all use schematic nature symbols in repeated patterns like Plains Indian art over painted, ungessoed or unstretched canvas backgrounds. Airy and witty with a dessicated, forlorn quality, they comprise the other idea percolating through the new show: the degeneration of nature into simplified sign systems that trigger or replace memories of the real thing. Whether reductive evergreens, cacti, fern, mountain peaks, lakes or rivers, each picture contains a different ordering of the same signs.

More exploratory (or rushed?) than fulfilled, these works lack the gorgeous painterly finish of the other acrylics. More exalted yet less sensual, they seem a new direction if they are not really a detour. Viewed alongside their fresh origins in the unframed paper pieces, they appear measured, perhaps stretched or inflated. When viewed together with the various other works, though, everything assembles into a 21st-century government report on an inviting but dangerous terra incognito. I want to go there.