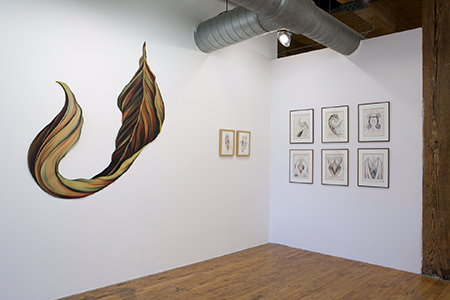 As an historical exhibition, “Faith Wilding: Fearful Symmetries Retrospective” is a little unusual for a space that’s typically filled with shows by cutting-edge artists, young Chicagoans or the commissioned projects of the artists in the threewalls year-round residency program. With strong Chicago ties (she’s Professor Emeritus of performance art at the School of the Art Institute of Chicago), the Paraguay-born artist is currently on the faculty at Vermont College of Fine Arts and a visiting scholar at Brown, though she’s known for her groundbreaking oeuvre as a second-wave feminist artist. The retrospective (the first for the artist) encompasses 40 years of Wilding’s practice, from the early work on the West Coast with artists like Judy Chicago, through a powerful, visceral print series made this past year.

Since the 1970s, Wilding’s aesthetic has been unwavering. Illustrative and figurative, her drawings, collages, paintings and prints feature washy, organic forms: plants, animals, embryos, and men and women in various states of physical growth and transformation. Often, Wilding’s signature pseudo-scientific imagery is punctuated by found material and poetic, handwritten text. Her earliest two-dimensional works, “Blood Transformation Mysteries” (1973) and “Moth Triptych” (1974), are exquisite explorations of form in watercolor, ink and graphite. Smooth, organic abstractions, these pieces recall the work of Georgia O’Keeffe, whose name literally appears in one of the 28 drawings of the “Tears Installation” (2009-2010). Along with O’Keeffe, shout-outs, textual references and quotes from Virginia Woolf, Nancy Spero, Agnes Martin, Eva Hesse, Sharon Hayes and Irina Aristarkhova (who joined the artist for a discussion organized in preview of the exhibition), amongst others, appear frequently in Wilding’s titles, as well as in the pieces themselves. Wilding weaves a continual thread through the practices of these other women, emphasizing the powerful, art historical lineage the artist contributes to and builds upon.

Wilding has a unique ability to oscillate between the literal and the symbolic. In a series “Pedigree Wall” from 1999, brightly colored illustrations of what are mostly recognizable as uteruses, eggs, sperm and other microbiological elements of procreation are painted upon forms from an Assisted Reproduction Fertility clinic. Generally speaking, this concept could be in danger of being too on-the-nose to really resonate with the viewer, but the cold, impersonal nature of the medical questionnaires activated by Wilding’s emotive painting amplifies the personal to such an intense degree that the viewer cannot help but visualize herself in the situation. The more literal the association with the body, the more powerful the effect Wilding’s works have on the viewer. Two watercolors from 1990, “Untitled Drawing (Mermaid with Male Attired Figure)” and “Untitled (The Parents),” are nearly life sized, their physical presences truly imposing. The 92 colorful watercolor prints embellished with ink in 2013’s “Rorschach Wall” are symbolic “wounds,” though the effect of the dried liquid on the delicate, skin-like paper makes it more like a bodily experience than a mere depiction of it.

Also represented in the retrospective is Wilding’s performative practice, with events, readings, conversations and screenings scheduled throughout the duration of the exhibition. However, in the gallery are a pair of videos documenting past performances: “Waiting” (1974), and “Wait, With” (2007). The former is linear and direct, with the artist reciting a list of statements: “Waiting to shave my legs,” “Waiting for him to kiss me,” “Waiting for my wedding night,” etc. In the latter, the artist approaches the theme again, though here she’s self-reflexive, addressing (amongst other things) the female performer’s self and identity. If the content of her paintings and drawings are about bodily transformation, these videos illustrate a transformation of a different kind: not only that of a personal artistic practice, but also that of the feminist dialogue in art history.