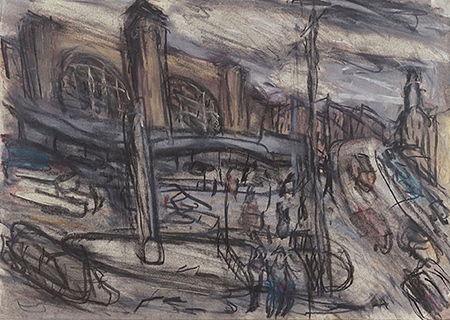 The English essayist Samuel Johnson famously said, “When a man is tired of London, he is tired of life; for there is in London all that life can afford." London is the subject of this show of Leon Kossoff’s work, and while it doesn’t depict “all of life” in the city, it does convey a sense of familiar pleasures and fond appreciation of architecture and place. The drawings and paintings range from the late 1950s to 2012, and they are in the artist’s expressionistic style - the main details drawn with loose, overlapping strokes of black lines, then modest color added with pastel in the works on paper, or oil in the paintings.

In Kossoff’s palette, London is a somewhat gray, even gloom-ridden, city with reddish tones in the brickwork and bits of blue breaking through. But this monochromatic effect is not dull, his strokes are insistent and energetic, and there’s a sense of bustle and movement in this old metropolis, seen through the haze of memory mixed with mystery.

The focus is often on architecture, as in two charcoal and pastel drawings, “City Rooftops” (1957) and “King’s Cross Stormy Day no. 3” (2004). The former depicts the rooftops of London in what looks to be a business or institutional part of town – some flattened roofs, some monumental ones. Here the outlines are made with white, and the gloom makes me think it’s very early morning, just as the light is beginning to appear on the horizon. The latter drawing captures the façade of the very busy "King’s Cross Station," with its two giant arched windows, the clock tower in between, and the swirl of traffic and of pedestrians in front.

Kossoff is especially drawn to places of juncture – train stations, bridges, and roundabouts. They are places where people and vehicles merge and converge, places of activity, brief meetings and encounters. There’s “Embankment Station and Hungerford Bridge” (1994), a medium-sized charcoal with shadowy figures of people going to and fro in front of the station. “Outside Kilburn Underground Station” (1984) is a large painting, about 7-feet wide, showing a similar scene in front of another station. Here the people passing are more in close-up – we’re looking at them on street level here, as opposed to the high angle of “Embankment Station” – but they are still a bit of a blur. This painting could almost be an abstract, with the blur and the energetic lines conveying London's incessant movement and energy.

There’s more quiet and contemplation in the half dozen drawings of "Arnold Circus" (what we would call a “circle”), surrounded by the Boundary Estate in East London. Completed in 1900, these five-story, brick apartments are known as the first “council flats” - public housing built by local authority. They surround a small hill made up of the rubble from building them, with a garden and bandstand at the top. Kossoff grew up in this neighborhood, and his fondness for the area is reflected in the soft way he’s captured the buildings hugging together. As shown in two drawings, they cling to the garden and bandstand, which still exist. The simple bandstand is a pavilion with open sides, but it clearly provides the physical center to this community.