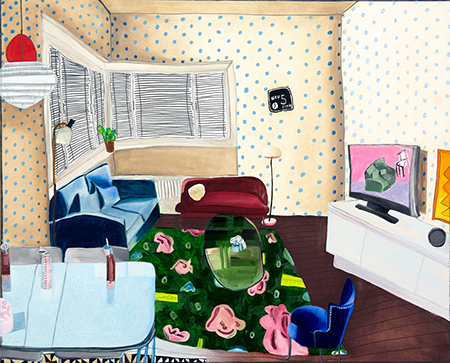 There’s a notable new gallery in the space that used to be Chambers Gallery, Hap Gallery, which started programming this past November.  Currently, New York City-based Gabrielle Garland fills the small but elegant space with ten paintings, collectively (and ironically) entitled "Untitled." Garland, who received her art education at the School of the Art Institute of Chicago and the University of Chicago, paints domestic interiors in a self-consciously naïve style: The perspective is off, the color schemes simplistic, the rendering amateurish. The effect is quirky but not precious.

Mostly these oil paintings on panel portray middle-class homes, but a few of the residences are more ornate, such as a gilded green number based on a Russian palace. It’s hard to look at the works without smiling. As an adjunct to the show, the gallery has published a coloring book based on Garland’s paintings. Owner/director Judy Jacobson says Hap plans to produce a different kind of documentation for each show they mount.