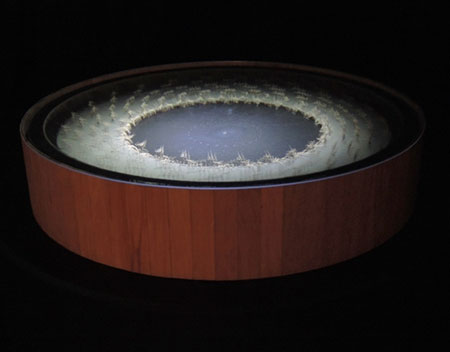 This "Latin American Group Show" features Gustavo Diaz, Marcelo Grosman, and Natalia Cacchiarelli, all from Buenos Aires, as well as the collaborative team Leidy Chavez and Fernando Pareja from Colombia.

“Opresores Oprimidos” (Oppressed Oppressors), a new animated installation by Chavez and Pareja, is the most compelling piece in the exhibition. Located behind black curtains in a corner of the gallery, this large circular vignette (48 inches in diameter) was inspired by 19th-century pre-cinema animation devices such as the zoetrope and praxinoscope. Using a combination of sculpture, animation, and stroboscopic lights, the duo has created a fascinating political statement in which a seemingly endless supply of tiny soldiers with machine guns run out of archways around the outside of the circle and jump into a central void. The endless looping makes a powerful comment on Colombia’s violent history and its ongoing struggles with political factions and armed conflict.

Chavez and Pareja were interested previously in conceptual and performance art, digital photography, and media-based projects, but a few years ago they shifted away from the virtual world. They began experimenting with old record players, mirrors, and lights to replicate the optical effects of such artists as Eadweard Muybridge (1830-1904) and Charles-Émile Reynaud (1844-1948). While "Opresores Oprimidos" deals with power and oppression, previous installations have focused on ecology, nationalism, and other socio-political issues.

The tiny running soldiers in “Opresore Oprimidos” are made from beeswax models, while the revolving surface, arches and circular frame are constructed from wood and cardboard. The mesmerizing finished piece, however, is much more than the sum of its parts.

Gustavo Diaz works with Plexiglas, drawing on sheets of clear acrylic with a laser. Three-dimensional sculptures are created by lining up multiple acrylic sheets with small spaces between them, as well as presenting similar sculptures in Plexiglas vitrines. The intricate patterns engraved on the acrylic sheets create three-dimensional drawings when assembled. They collectively generate a perception of movement as one walks around or past them. One image suggests a dandelion gone to seed, another a sky full of clouds, and a third a figure. These pieces are optically fascinating and possess an elegance that derives partly from their transparent quality. Diaz also shows three intricate, complex drawings based on nature.

Marcelo Grosman’s compositions are presented in LED light boxes or shallow frames. Lenticular lenses are used to produce images with an illusion of depth that have the ability to change or move as the particular work is viewed from different angles. Most of Grosman’s images deal with the human body, and their horizontal format gives them a narrative quality. In “M.P. #3.1,” a posed male and female face each other and are repeated across the picture plane, shifting positions as one walks past. Other pieces are drawn from instructional films on the human body. In the last few years, Grosman has abandoned classic photography, choosing instead to work with appropriated images. “Menor 14-18 #3,” for example, is a portrait of a young female created from a composite of mug shots taken from the Illinois Department of Corrections database. The life-size scale of this piece (72 by 48 inches) gives it a powerful presence.

Also notable in the exhibition are two optical paintings on paper by Natalia Cacchiarelli. Using narrow bands of color arranged in a series of squares, she creates the illusion of either a pyramid or a deep hole, depending on one’s perspective. Like classic Op Art, the repeating patterns create an impression of vibration and movement.

These four artists complement one another, and the result is a provocative collection of visually stimulating, thought-provoking work. The exhibition fulfills the gallery’s mission – to present innovative, experimental art that shapes, informs, and challenges current perceptions of contemporary art.